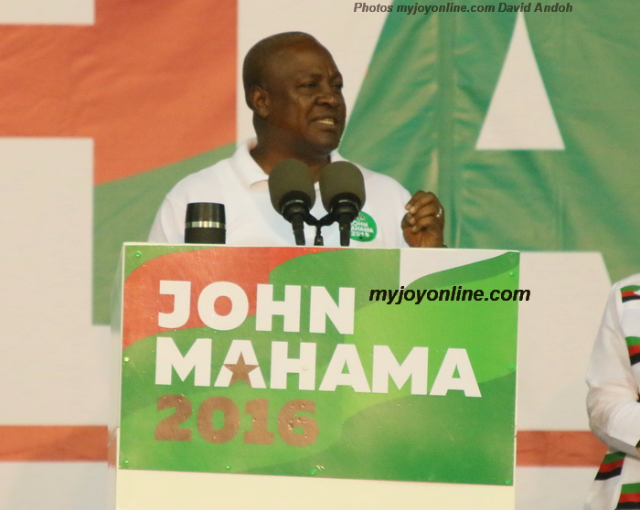 Flagbearer of the governing National Democratic Congress (NDC), President John Mahama has kickstarted his 2016 campaign for re-election in the Western Region.

This comes two clear days after the party launched its national campaign at the Cape Coast Sports Stadium in the Central Region on Sunday, August 14.

The campaign will afford President Mahama the opportunity to inspect some new projects executed by the government namely, schools, markets etc. The president will commission a cold store at New Takoradi.

The Fisheries and Aquaculture Development Minister, Hanny Sherry Ayittey, says the Cold Store project was made possible after an electricity company aided government with a transformer which has been installed.

This she said would “give them the opportunity to get an ice cube in this season to preserve the fish so certainly, the commissioning will be coming on.”

The president's main target in the region would be to convince residents of Elembelle, and Jomoro, to vote for the NDC in the upcoming election.

He will also address residents of region about the need to use the oil resources very well.

Some political analysts have described the decision by the NDC to start its campaign in the Western Region as strategic. The region has been a swing region for both the NDC and its largest opponent the New Patriotic Party (NPP).

NPP flagbearer, Nana Addo Dankwa Akufo-Addo, rounded up his five-day campaign tour of the region where he promised to establish a Coastal Development Authority to oversee the development of towns near the coast.

Even though the math regarding the cost of the project is yet to be done, Policy Advisor of the NPP Standard Bearer, Boakye Agyarko, said the true intention of the project would be defeated if Ghanaians were to bother themselves with the cost.

He said the project is aimed at addressing issues of teenage pregnancy and illiteracy affecting families living near coastal areas .

“The Coastal Development Authority will not become an instrument for looting government resources,” he said, adding, a project such as this calls for what he described as“envelope estimation” – where you give an estimate of a good idea without worrying about the true cost.

Meanwhile, the promise by the NPP leader has elicited a mixed reaction from persons living in coastal areas.

In the Central Region:

Joy News’ Central Regional Correspondent, Richard Kojo Nyarko, reported that sections of fisherfolk in the region are impressed with the promise made by the NPP leader.

“It is a good concept by the NPP leader. It is important the Coastal Development Authority does not become like the other bodies that have been left to rot,” one resident said.

“This might be a good idea but there is already SADA and CEDECOM and money have been sunk into some projects and they do not know what has come out of it,” another said. “He [Mr Akufo-Addo] has to concentrate on empowering the existing bodies.”

In the Volta Region:

The reaction from residents in the Volta Region was no different. Joy News’ Ivy Setordjie explained some residents believe the promise is part of an election year gimmick where politicians dish out one promise after the other.

“We are in the election year and for that matter, most of the politicians will promise heaven on earth,” one resident told Joy News.

Another also added “The premix fuel challenges are daunting. There is also challenges families face especially when the father and mother are illiterate the children will be illiterate so the Authority will help address that.”