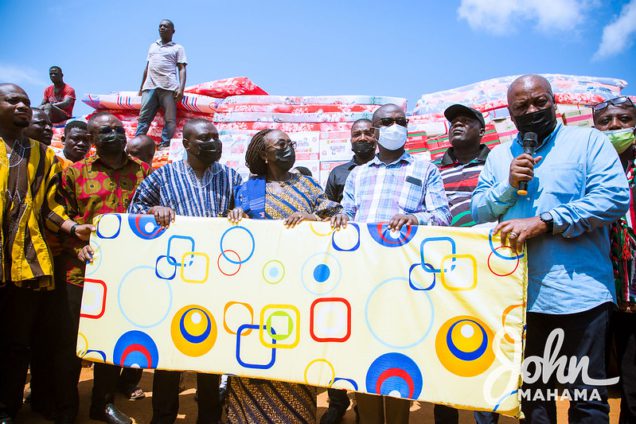 Former President John Dramani Mahama has donated 2,000 bags of rice, 2,000 student mattresses, 1,000 cans of tomato paste, 1,000 gallons of cooking oil and other items to victims of the tidal waves in Keta, Anlo, and Ketu South in the Volta Region.

Mr. Mahama, who was the NDC’s 2020 Presidential Candidate, also inspected the extent of damage caused by the tidal waves at Anyanui.

John Mahama, interacting with the victims, called on the government to be more compassionate and provide more forms of relief to the affected people.

He criticized the government for not sending representatives to sympathize with the victims.

He said that “even if you cannot provide them with anything, just a visit to show that you care about them is important.”

Since the incident happened on Sunday, the officials of the National Disaster Management Organization have been in the area to provide support for affected persons.

However, their relief items have been woefully inadequate.

Mr. Mahama again criticized the government for failing to allocate adequate resources to the NADMO office.

“NADMO doesn’t have the items, and I don’t blame them. It is the fault of the administration because they are not given the sufficient resources to be able to respond.”

On their part, the residents who were affected by Sunday’s disaster expressed their gratitude to the former president.