Mali elections: Restoring the rule of law after two years of crisis - MyJoyOnline.com

Mali elections: Restoring the rule of law after two years of crisis 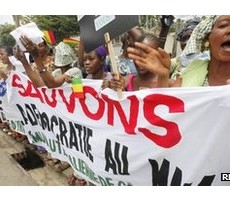 Following two years of extrajudicial killings, forced disappearances, and sexual violence, the first round of legislative elections is due to take place on 24 November.

Amnesty International has extensively documented human rights abuses committed during the last two years and has experts available for comment.

"But to show they really mean business, the authorities need to investigate and prosecute the perpetrators of unlawful killings, forced disappearances, torture and sexual abuse.”

The first round of legislative elections, follow peaceful presidential elections in July and August earlier this year. The second round will take place on 15 December.

Amnesty International is publishing a Human Rights Agenda on 30 November to coincide with a visit to the country by its Secretary General, Salil Shetty.

The Agenda is calling for an end to human rights abuses by all parties of the conflict and for thorough and independent investigations.