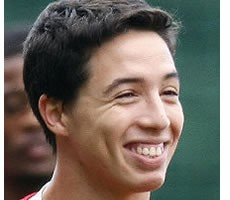 Manchester City have agreed terms with Arsenal for midfielder Samir Nasri, with the 24-year-old set for a medical .

Nasri trained with Arsenal on Tuesday morning ahead of the club’s Champions League qualifier against Udinese on Wednesday, but has been omitted from the squad for the match.

The France international will travel to Manchester to finalise a deal, worth a reported £25m to the Gunners.

Nasri is in the final year of the Arsenal contract he signed in 2008.

“The summer was very difficult because we had Fabregas and Nasri in permanent transfer negotiations and that is draining in the end,” said Arsenal manager Arsene Wenger.

“We lost two great players and that’s a sad side of the story. But at some stage it has to be over because you want to focus on the future.”

City boss Roberto Mancini said on Sunday that he hoped to complete the deal within 48 hours.

But the Italian also warned that he might abandon his long-standing pursuit of Nasri should he play against Udinese and become ineligible for the group stages of City’s own Champions League campaign.

Nasri’s move to City would be the second major departure from Emirates Stadium this summer, following Cesc Fabregas’s transfer to Barcelona.

When asked why Arsenal had left it so late to sell both players, Wenger replied: “What you forget is that it doesn’t depend only on us.

“We wanted to sort all these cases out very early after the summer but it wasn’t possible – the pace is not only dictated by us unfortunately.”

Wenger warned in July that Arsenal could “no longer be regarded as a big club” if the midfield pair were sold.

But the Frenchman has since stated that he will seek to use the proceeds from their departures to strengthen the squad before the close of the summer transfer window on 31 August.

BBC Sport revealed on Tuesday that the Gunners were considering a bid for Lille midfielder Eden Hazard.

“We’ll see what we can do – we are working very hard on the transfer market,” added Wenger.

“But we want ideally more. We are short in midfield at the moment and that’s where we want to strengthen.”