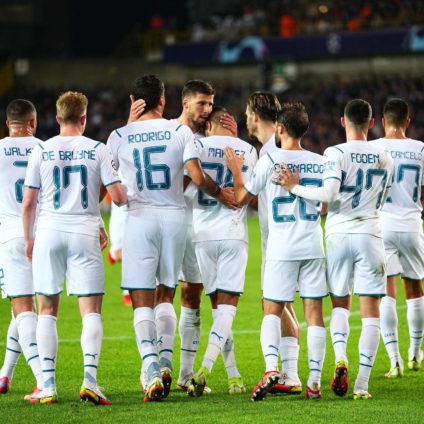 Riyad Mahrez scored twice and Cole Palmer got his first Champions League goal for Manchester City as Pep Guardiola’s side put in a superb performance to sweep aside Belgian side Club Bruges.

The visitors were slick and confident from start to finish as they moved to within one point of Group A leaders Paris St-Germain with their second win in the competition.

City had been dominant from the outset but their opening goal did not arrive until the 30th minute when Joao Cancelo latched onto Phil Foden’s brilliant ball to slot through the legs of former Liverpool goalkeeper Simon Mignolet.

Mahrez then added a second from the penalty spot just before the break after he had been fouled.

City did not ease up in the second half and the third goal arrived quickly as Mahrez found Kevin de Bruyne, whose one-touch ball sent Kyle Walker through and the full-back fired into the far corner.

Nineteen-year-old academy graduate Palmer then scored his side’s fourth just two minutes after coming onto the pitch, bending a fine shot into the back of the net from the edge of the box.

Hans Vanaken turned home a late cross for the hosts but City responded immediately to get their fifth, Mahrez running through before finishing coolly one-on-one.

The victory for City was the ideal response to defeat at PSG in their previous Champions League outing as they moved onto six points from three games.

Foden dazzles in unusual role as Palmer makes his mark

After losing 2-0 at PSG on 28 September, Guardiola had shown his determination to get back to winning ways quickly in the Champions League by naming a strong XI for the trip to Belgium.

The one thing that did raise an eyebrow, however, was the decision to play Foden as a false nine in what was his first start in the competition this season.

Guardiola had previously said that finding a position for Foden would never be a problem because he could effectively play anywhere and once again the England international repaid his manager’s huge faith in him to deliver in any role.

His runs and link-up play were excellent throughout and it was of little surprise that he played a key role in the opener.

It is hard for words to do Foden’s assist justice as, from just inside the Club Bruges’ half, he spotted Cancelo’s run and played an inch-perfect ball for his team-mate to run onto, control superbly and then finish.

Foden flourishing under Guardiola after progressing from the academy will no doubt delight City fans and Palmer suggested he, too, could be on course to follow in Foden’s footsteps.

His first goal in Europe showed composure beyond his years as he became only the third teenager to score in the Champions League for Manchester City, after Foden and Kelechi Iheanacho.