Man steals LPG cylinder to save wife from dying - MyJoyOnline.com

Man steals LPG cylinder to save wife from dying 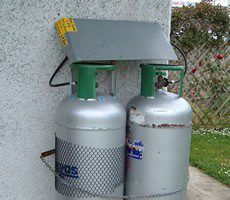 Drama unfolded on Monday at a Cape Coast circuit court, presided over by Kofi Amatawee, when a 32-year-old man, Albert Hammond, said he stole a gas cylinder to save his wife from dying.

He stole the cylinder at Saltpond in the Mfantsiman Municipality of the Central Region.

Hammond, who plead­ed guilty to the offence of unlawful entry and steal­ing, was sentenced to 24 months imprisonment for the first count and 24 months for the second count.

According to him, he needed money to purchase some blood for his wife who was on admission at the hospital to deliver their child.

The presiding judge told him that the fact that he needed money to save his wife does not give him the right to steal people’s items.

The prosecutor, ASP Okyere Andam said the complainant in the case was a nurse at the Saltpond Government Hospital.

ASP Andam stated that on July 12, 2014, the com­plainant travelled to Takoradi in the Western Region, leaving her gas cylinder on her porch.

The accused then took advantage of the complainant’s absence, snuck onto the porch and stole the gas cylinder.

He went ahead and sold it to one Hanson Duku for an amount of GHâ‚µ50.00.

The court was told that after using the cylinder for some time, Duku sold it to one Emmanuel Arthur for an amount of GHC40.00.

The prosecutor averred that the victim, upon her return from Takoradi, detected the crime and reported the matter to the police.

In the course of their investigations, the police, he disclosed, arrest­ed Arthur, leading to the arrests of Duku and Ham­mond.

Meanwhile, Arthur and Duku have continuously been absenting themselves from court and a bench warrant has been issued for their arrest.