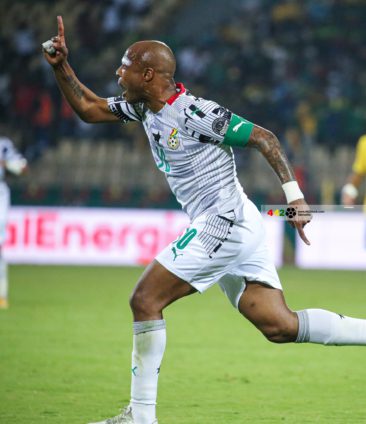 The Black Stars could only manage a draw against Gabon on Friday, January 14 as Jim Allevinah scored late in the game to earn a draw for Gabon at the Ahmadou Ahidjo Stadium.

Ghana went into Friday’s game as they search for their first win in the 2021 Africa Cup of Nations but failed to protect their lead.

Andre Ayew gave Ghana the lead in the 18th minute with a cracking finish from outside the penalty box after receiving a pass into his path from Thomas Partey.

After opening the score, Ghana looked to have relaxed the game as they allowed Gabon to see much of the ball. The Panthers should have equalised before the half-time break but Joojo Wollacott was on hand to make a fine save from Athanase Bouanga’s free-kick.

The Balck Stars headed into the break with the scoreline at 1-0.

After the recess, both teams struggled to keep up the tempo from the opening half but Gabon looked the most threatening team.

Andy Yiadom, Baba Rahman and Baba Iddrisu all made vital interventions in the course of the game to protect Ghana’s one-goal lead.

However, with two minutes to go until the full-time whistle, substitute Allevinah levelled the game for the Pathers with a commanding strike from just inside the 18-yeard box to break the hearts of Ghanaians.

The result on Friday means, Ghana will now have to win their last game against Comoros at all cost to stand a chance of progressing to the knockout stages.