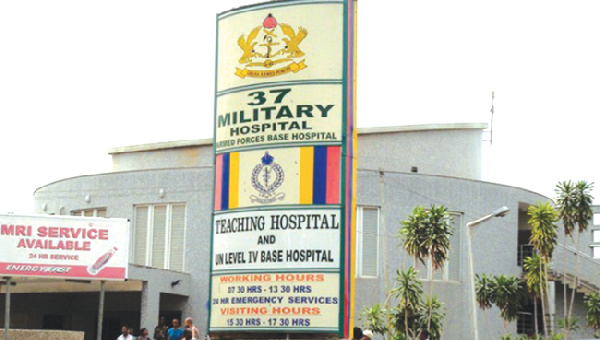 The Ghana Medical and Dental Council has begun investigations into recent allegations of negligence and extortion against a surgeon at the 37 Military Hospital, after the family officially petitioned it.

Solomon Asare Kumah came to Ghana in 2019 from the UK to visit his ill father and was taken ill himself.

Emergency surgery was to be conducted to remove tumour in his head. But the surgery had to be postponed on three different occasions for a myriad of reasons including a malfunctioning drilling machine.

The family alleges Solomon Asare Kumah’s head was split open on one of the occasions for the surgery but the process was abandoned following the failure of the drill machine. The doctors eventually succeeded with the process but he died three weeks after.

The Ghana Armed Forces has indicated it is investigating the issue.

Now, the family in a petition signed by his sister Dorothy A. Asare-Adolf, is asking the Medical and Dental Council as well, to look into the issue. They have raised seven queries against the surgeon and six against the hospital.

Brother of the deceased, Emmanuel Asare Kumah, says they don’t want any other family to go through such a situation, hence the decision to petition the council.

“The emotional and psychological pain that the family has gone through is something we don’t wish for anyone…We hope the Council lives true to what the statues have established them to do. We hope they look at the evidence and let justice prevail,” he told JoyNews.

Below is the petition;

COMPLAINT OF EXTORTION AND NEGLIGENCE AGAINST COL. DR. G.A.O. APPIAH AND THE 37 MILITARY HOSPITAL

I write on behalf of the Asare-Kumah Family and in response to your invitation following an audio recording by my brother, Emmanuel Asare-Kumah on the circumstances leading to the death of our elder brother, Solomon Asare-Kumah at the 37 Military Hospital from August 22 to October 21, 2019.

In the aftermath of Solomon’s death and following a meeting with the Commander of the hospital, Brigadier General Nii Adjah Obodai, the family was asked to present a written petition on our concerns of extortion and negligence.

This was presented to the Commander’s office but till date nothing has been heard from that office.

It is our expectation that as the body with oversight responsibility for the professional practice of medical doctors in Ghana, the Medical and Dental Council would take steps to find some answers for the grieving family in relation to the following:

1. What constitutes an emergency in matters relating to Solomon’s condition?

2. Whether by practice the surgeon was right in charging the family $10,000.00 for the surgery to be paid to him personally and not through the hospital?

3. Whether by practice at the 37 Military Hospital, it is the responsibility of patients to buy surgical tools needed for their surgery while stating categorically that at no point in time did the family agree to purchase its own surgical tools.

4. If the assertion by the Hospital Administrator that Col. Appiah had indicated to him that it was the family that agreed to purchase its own surgical tools, which tools were used prior to the September 19,2019 purchase date when two previous attempts at surgery had been made?

5. That whiles Col Appiah made it clear to the family that the money paid to him will cover the entire cost of the surgery, it was slapped with another bill from the hospital for the surgery. How is that to be reconciled?

6. That although after Solomon’s death, Col Appiah kept telling us the receipts covering the amount paid were not ready. He eventually produced one dated September 19, 20I9. If he so readily had that receipt why did it have to wait till November 4, 2019 to be given to us?

1. Whether the hospital has a schedule of fees for its procedures or whether individual doctors determine the cost of procedures for patients?

2. How was it possible that after a first doppler test ruled out DVT, Solomon subsequently got that condition whiles on admission and on daily doses of heparin?

3. Whether the Intensive Care Unit (ICU) has any senior doctors aside House Officers to monitor patients?

4. How was it that Solomon was overdosed on heparin and needed medication to reverse it?

5. The gowns used at the ICU are supposed to be disposable but this was not the case and for a sensitive unit like the ICU this is worrying.

6. Whether mobile phones are allowed into the ICU?

It is our hope that the Councii will help bring closure to events leading to the death of Solomon and to also ensure that no family goes through this painful experience.