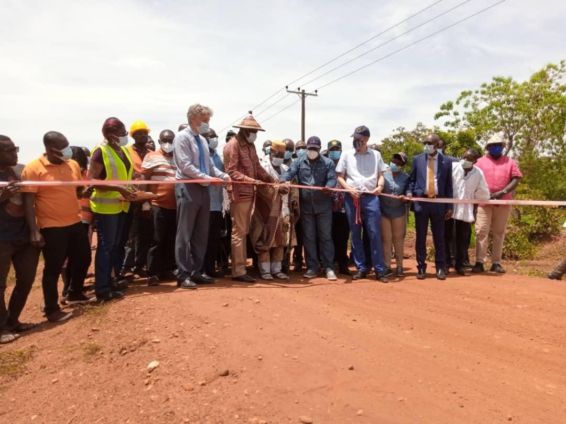 The Minister of Roads and Highways, Mr Kwasi Amoako-Atta has cut sod for the rehabilitation of 670 km of feeder roads linking food production areas and market centres across eight Municipalities and Districts in the Upper West Region.

The 35 million euro roads rehabilitation project is one of the components of the larger 145 million euros European Union – Ghana Agricultural Programme (EU-GAP).

EU-GAP is a programme that aims at developing sustainable agriculture in the Upper West Region based on three complementary pillars including; the Market Oriented Agriculture Programme (MOAP), the Resilience against Climate Change (REACH), and the ‘Productive investments for sustainable agriculture development in the Northern Savannah ecological zone of Ghana’.

Speaking during the groundbreaking ceremony at Kpongu, a community in the Wa Municipality, Mr Amoako-Atta noted that the rehabilitation would be done within the first 24 months after which Performance Based Maintenance activities would then be performed for the next 18 months.

He indicated that the primary aim of the roads programme was to support the broad objective of the GAP programme by providing all-weather access of transportation to the various markets and value chains within the selected areas in the region.

The Roads and Highways Minister said roads to be rehabilitated also included; selected roads leading to the Black Volta, existing dams and boreholes for the main purposes of irrigation activities.

Mr Amoako-Atta disclosed that the contractors were all Ghanaian companies and expressed hope that they together with the consultants would perform well and within schedule to support the overall EU-GAP programme in the region.

He said funding 670km of roads under a single project was unprecedented and expressed the country’s gratitude to the EU for their generous and continued support.

Mrs. Diana Acconcia, the EU Ambassador to Ghana in a speech delivered by Mr Pieter Smidt Van Gelder, Deputy Head of Mission, stated the commitment of the EU to support the socio-economic transformation of Ghana and particularly in the Northern Regions.

She said the lack of efficient infrastructure was a major bottleneck to the development of agricultural production and its processing in the Upper West Region, which the EU was proud to support.

“The project will facilitate the transport of products between areas of production and markets. It will unlock new economic opportunities in the Upper West Region, diminish transport costs, thus increasing the trade of agricultural products, and ultimately increase farmers and household incomes,” she said.

She recognized the joint effort of the World Bank and the EU saying, “This intervention is a great example of how donors’ partnerships when we join forces have a greater impact”.

The Programme Leader for Infrastructure at the World Bank, Mr David Villar noted that the Output and Performance-Based Road Contracts (OPBRC), which includes not only the construction but also the follow-up maintenance services in lands and contracts was the first of its kind in Ghana and payments were based on achieving the performance targets.

He said roads linking farming communities were poorly developed, adding that the project was designed specifically to address this need.

Director, Policy Planning, Monitoring and Evaluation at the Ministry of Agriculture, Mr Twumasi Ankrah who represented the Minister of Agriculture noted that the support was in line with the government’s effort to bridge the gap between the North and the South through agriculture.

The provision of infrastructure such as feeder roads had been prioritized for the transformation of the agricultural and industrial sectors and commended the EU, the World Bank and the collaborators for the support whilst urging beneficiary communities to support the project for it to achieve its intended aims and objectives.

The Upper West Regional Minister, Dr Hafiz Bin Salih noted that the region has a good road network, however, they are in a deplorable condition with some of them being completely unmotorable at the peak of the rainy season. The effectively left some communities inaccessible.

“So it is refreshing to note that there is construction and rehabilitation of feeder and farm access roads”, he said.

He also encouraged members of the beneficiary communities to cooperate with the contractors to ensure timely completion of the projects.

DISCLAIMER: The Views, Comments, Opinions, Contributions and Statements made by Readers and Contributors on this platform do not necessarily represent the views or policy of Multimedia Group Limited.
Tags:
Feeder roads
Minister of Roads and Highways
Mr Kwasi Amoako-Atta
Upper West Region