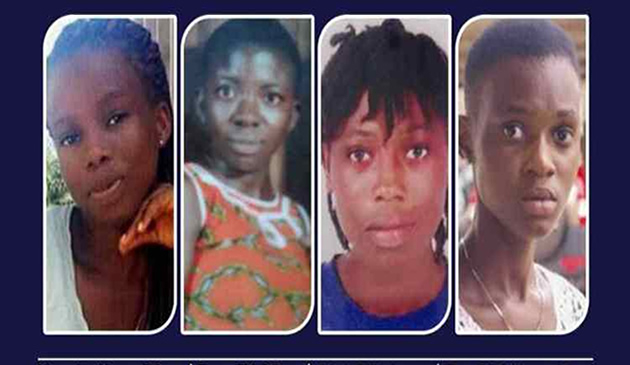 The two suspects in the four missing Takoradi girls case have been sentenced to death by the Sekondi High Court, Friday.

The victims were captured at different locations; including Kansawurodo, Butumagyebu, Nkroful Junction all in Sekondi-Takoradi of the Western Region.

After nearly two years of hearing the case, the seven-member jury found the two offenders guilty of committing the crime.

Presiding over the case was Justice Richard Adjei-Frimpong who sentenced them to death by hanging. The suspects, however, may appeal the judgment within 30 days should they choose to do so.

Following the judgment, there were mixed reactions; whilst some were satisfied with it, the relatives of the girls who are still in denial of the death of their daughters want more from the country’s justice system.

Francis Bentum, one of the victim’s relative, does not believe that this brings justice to the family. The only thing that he says will bring him justice and satisfaction is the return of his grandaughter.

As far as he is concerned, his daughter is not dead since the former Criminal Investigation Department boss, Tiwa Maame Yaa Addo Dankwah assured them that their daughters were still alive.

He accused the Police of manufacturing the DNA report that confirmed the death of victims in order to clear the case from their desk.

Another family member, the mother of one of the girls, who was at the High Court, Josephine Amo in an interview, however, expressed satisfaction with the judgment.

“If they will really abide by what they are saying, then I am pleased with it,” she told the media after the proceedings.

The journey so far

On January 4, 2019, after months of fruitless checks, relatives, friends and some residents went on a demonstration demanding justice.

“The Police have not said anything to us, so we don’t know if they are working on it or not,” a worried parent told the media during the demonstration.

This led the Western Regional Police Commander, DCOP Vincent Redeemer Degir to hold a first official press conference on the matter. Giving information about how the kidnappings occurred.

Residents of Takoradi begun a series of protests to draw more attention to the saga and to put pressure on the police to investigate the matter.

The then Criminal Investigations Department (CID) boss, Tiwa Maame Yaa Addo Dankwah visited the families on January 26 with words of hope and safety of their children.

At a press conference on April 2, 2019, Madam Addo Dankwa assured families that the police knew where the girls were.

“Together with the BNI we have worked very well and currently know where the girls are. I am unable to give the details because we don’t want to compromise their safety. The assurance to the family is that they should keep on keeping on,” she told the press.

However, that was not never to happen. Parents of the girls accused her of deceiving them.

Still searching for the girls, the police finally discovered their bones in a septic tank in the house of the lead suspect, Samuel Udeotuk Wills.

A subsequent DNA test confirmed that they were indeed the remains of the girls.

DISCLAIMER: The Views, Comments, Opinions, Contributions and Statements made by Readers and Contributors on this platform do not necessarily represent the views or policy of Multimedia Group Limited.
Tags:
Sentenced to death
Takoradi girls killing