MMDCEs must be innovative in raising revenue for development – Archibald Letsa 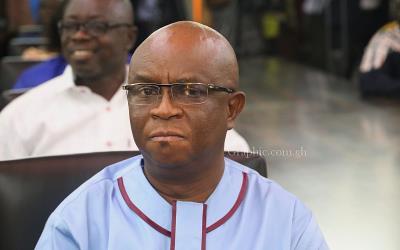 Volta Regional Minister, Dr Archibald Yao Letsa, has called on all Metropolitan, Municipal and District Chief Executives MMDCEs to be innovative in revenue mobilisation to support the government’s development agenda.

He said the over-reliance on Central Government for funds and services should be phased out if they needed to push forward the development of the country and to achieve the Ghana Beyond Aid agenda.

Dr Letsa, who is also the Dean for Regional Ministers, made the call at the official opening of the orientation for MMDCE’s in Accra.

The event is on the theme: “Effective leadership for local economic transformation and improved service delivery in Ghana: the role of MMDCEs.”

The four-day orientation seeks to equip the MMDCEs with the requisite knowledge, skills, competencies, and attributes for effective local leadership, orient new MMDCES on their roles, responsibilities and introduce them to government flagship programmes.

It is also to provide a common platform for experience sharing and to energize them to improve performance.

“MMDAs should strive to collect more revenues than they spend on their activities, saying the case of no money within the Assemblies should be a thing of the past.”

He said the MMDCEs had the authority to levy and collect rates and that should enable them to do more.

“Get your people to trust your leadership by being accountable and transparent and they will willingly contribute more for the development of your respective areas,” he added.

He called on the MMDCEs to institute measures to increase the revenue by 100 per cent annually to make your service self-sufficient and less reliant on Central Government funds.

Dr Letsa said as Regional Ministers they had exhibited their dedication to work with the support of all the MMDCEs, adding there would be regular monitoring on performance assessment feedback.

“We will coordinate and evaluate the performance of MMDAs in the Regions and also monitor the use of monies mobilized or allocated and released to the District Assemblies by any agency of Central government and also provide the support for any function assigned to MMDAs in the Regions,” he said.

The Regional Minister congratulated the MMDCEs on their appointment and assumption of office, saying they had no doubt about their competencies and look forward to a renewed commitment, dedication, citizen-centred and result-oriented leadership.

“I implore you to explore the avenue to interact with the various Assemblies members to get them to buy into government policies and programmes, validate reports, contribute to discussions and share the achievement of their sectors with the representatives of the people at the local level,” the Regional Minister said.

Mr Henry Quartey, the Greater Accra Regional Minister, said the theme for the orientation was commendable because effective leadership was essential to a properly functioning society.

He said effective leadership was a responsibility and the main driver for the growth, development and innovation that the country desired.

He said MMDCEs were the representatives of the President in their jurisdictions and were responsible for the day-to-day performance of the executive and administrative functions of their respective Assemblies.

“In this regard, they need to provide concrete actions for their followers to emulate. MMDCEs must be visionaries and be on top of issues to lead the implementation of government policies and programmes for improved quality service delivery for citizens,” he added.

Mr Quartey said they should bear in mind that, “in our era of democracy, the citizens have become more aware of their rights and are demanding quality service delivery, respect, fairness and accountability from public servants.”

He said the orientation would equip them with the requisite knowledge, skills and attitudes to “hit the ground running” and sustain the momentum for progress, and urged them to perform their duties satisfactorily, not give flimsy excuses all the time, and have a strong drive to develop and improve themselves.

DISCLAIMER: The Views, Comments, Opinions, Contributions and Statements made by Readers and Contributors on this platform do not necessarily represent the views or policy of Multimedia Group Limited.
Tags:
Development
Dr Archibald Yao Letsa
MMDCEs
Revenue