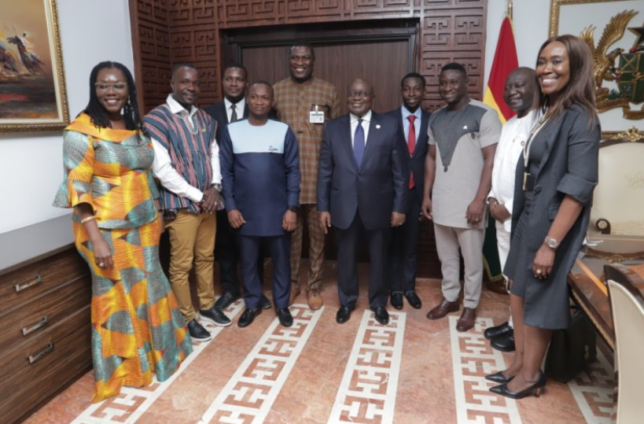 The association said it considered the payment of taxes as a major tool to drive the needed development and progress of any country and would thus collaborate with the government to boost the uptakes from the E-levy.

The association made that commitment when its leadership met with President Akufo-Addo at the Jubilee House, Accra.

That interaction was to officially introduce the MMAAG to the President and to present the challenges of the association in relation to the implementation of the E-levy.

The Electronic Transaction Levy is a tax applied on transactions made on electronic or digital platforms.

General Secretary of MMAAG, Evans Otumfuor told the President that despite the association’s initial resistance to the E-Levy, it had come to the realization that tax was necessary for the country’s recovery from the recent current economic meltdown.
“We also understand that government will have to take drastic measures in drastic times. The e-levy has now been passed into law and all citizens must obey, so we here as allies,” he said.

Mr Otumfuor commended the government for reducing the levy from the initial 1.75 per cent to 1.5 per cent and for the exemptions provided.

He however pressed that the Government took action to mitigate the attendant unintended challenges to their line of business, citing particularly the vexed issue of deductions made on the Mobile Money Agent’s accounts anytime funds are transferred to their bank accounts for purposes of accessing cash to serve customers.

The MMAAG General Secretary expressed the association’s readiness to work with the government to introduce policies to further develop the mobile money industry to create jobs and contribute to the development of the country’s economy.

“MMAAG is ready to partner government to bring more of these refreshing policies since the mobile money business is one of the areas governments can invest in to create more employment for the youth,” he emphasized.

President Akufo-Addo, on his part, commended the association for its sense of enterprise that has seen the growth of the mobile money market and the digitalization programme of the government.

He said the mobile money sector, which began small, had now become a major part of the economy due to the effort of stakeholders like the MMAAG. The President welcomed the groups’ offer of partnership to ensure that the E-levy was appropriately administered.

“I am grateful for this offer of partnership to make sure that this controversial tax is successfully administered. I think it is appropriate that direct stakeholders like you voice out your concerns like you did.

“I welcome very much this offer of partnership, the idea of an alliance for us to work together to see how best this new tax can be implemented and developed,” he said.

MMAG is a body of individuals who own and operate mobile money and its related activities.
The association is a representation of the over 300,000 Mobile Money Agents across the
country.