Moqtada al-Sadr: The ‘firebrand’ cleric who could calm Iraq

When the Americans launched the invasion that toppled Saddam Hussein in 2003 and plunged Iraq into the violent chaos that continues today, few people outside the country had even heard of a little-qualified young Shia cleric called Moqtada al-Sadr.

Nearly 17 turbulent years later, he is probably Iraq’s best-known figure and certainly one of its most powerful – instantly recognisable from his scowly features, yet elusively enigmatic.

Radical, firebrand, maverick, mercurial, quixotic – these are just some of the adjectives routinely attached to a man whose actions and positions have often seemed puzzling and contradictory.

Yet they have allowed him to achieve the extraordinary feat of surviving through years of upheavals during which his followers have battled the Americans and their allies, the Iraqi army, Sunni Islamic State group extremists, and rival Shia militias.

His current political manifestation, a coalition known Saeroun (loosely translatable as “On The Move”), came out top of the polls in the 2018 general election, putting Moqtada al-Sadr in pole position in the inevitable jostling to form a coalition government (nobody wins an outright majority in Iraqi elections).

s well as being a leading kingmaker, Moqtada al-Sadr is also a key player behind the upheavals currently shaking the country in protest against corruption and incompetence, themes he has been pursuing for years.

If he was obscure when the US-led invasion began, it was not long before he leapt into prominence.

As soon as Saddam Hussein’s grip was loosened, he set about activating the networks and legacy bequeathed him by his esteemed clerical father, Grand Ayatollah Mohammed Sadeq al-Sadr, in the teeming, deprived Shia quarters of Baghdad and the cities of southern Iraq.

It’s impossible to understand Moqtada al-Sadr’s undoubted appeal to the masses without reference to his eminent family clerical background. 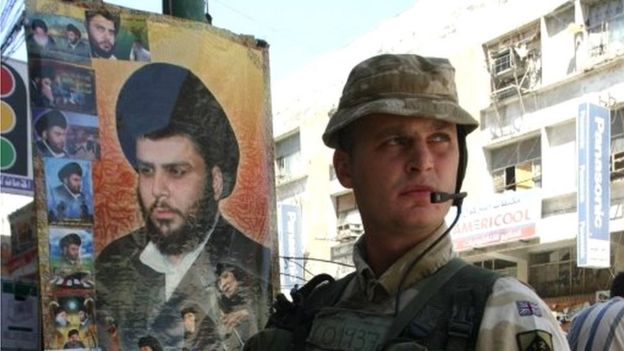 Both his father and his father-in-law, Grand Ayatollah Mohammed Baqer al-Sadr, were revered religious figures who cultivated strong social care networks among the Shia poor, and incurred the wrath of Saddam Hussein.

Both these illustrious forebears met violent deaths. Muhammad Baqer was executed by the regime in 1980 along with his sister Amina, and Muhammad Sadeq and two of Moqtada al-Sadr’s brothers were cut down in a hail of bullets in 1999 by assassins believed to be agents of Saddam Hussein.

So the concepts of sacrifice, martyrdom and social service are integral elements of the legacy inherited by the young Moqtada al-Sadr, who was only 30 at the time of the invasion.

He is often pictured between images of these two eminences, all three black-turbanned to denote a lineage stretching back to the family of the Prophet Muhammad.

At times, Moqtada al-Sadr has donned a white shroud to signal that he too is ready for martyrdom. Powerful images for the devout Shia masses.

Barely had the Americans and their allies settled in than Moqtada al-Sadr shot to prominence as the loudest voice calling for their ouster.

Words were followed by action, as he mobilised his followers into the Mahdi Army (a name with messianic Islamic connotations) which US commanders rapidly came to see as their biggest threat in Iraq.

From 2004 onwards, the Mahdi Army clashed repeatedly with US-led coalition forces and was blamed for numerous roadside bombings and other attacks. Moqtada al-Sadr also lambasted Iraqi leaders co-operating with the Americans.

His followers were deeply involved in the Shia-Sunni sectarian atrocities and general gangsterism of 2006-7. In 2008 his men fought pitched battles with Iraqi army troops sent in to tame Basra by then Prime Minister Nouri al-Maliki. 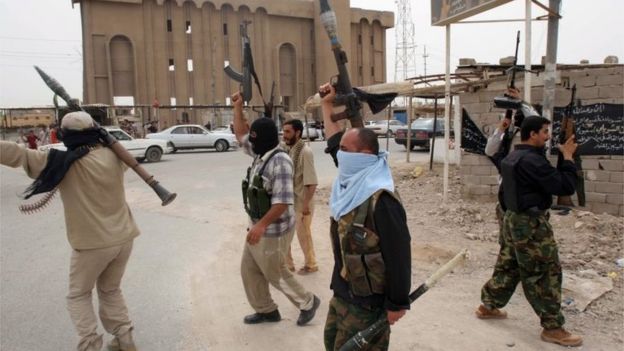 Through successive phases of turmoil since then, Moqtada al-Sadr has been adept and pragmatic in both the military and political spheres.

The Mahdi Army has been through several mutations, and is currently labelled the Peace Companies.

Politically, the Saeroun is the latest morph produced by the broader Sadrist movement.

Such shake-ups have allowed Moqtada al-Sadr to keep a grip on both spheres and prevent complacency.

In the 2018 elections he forbade any of his 34 incumbent MPs from standing again and ran a successful list which, astonishing for a supposedly Shia clerical-based outfit, included communists, secularists and Sunnis.

His decisions have often seemed fickle and bizarre, not least when it comes to relations with outside powers.

While he has been consistently against American interference in Iraq, he has often criticised Iran too, for its interference both in Iraq and in Syria. In 2017 he even visited Saudi Arabia, Iran’s regional arch-rival.

Yet he took refuge in Iran from 2007 until 2011, studying in the Qom seminaries to try to upgrade his clerical credentials; and in September this year, he was filmed sitting with the Iranian Supreme Leader, Ayatollah Ali Khamenei, and the mastermind of Iran’s regional influence, Gen Qasem Soleimani – images that caused a frisson through much of Iraq.

For Patrick Cockburn, author of a biography of Moqtada al-Sadr, there is no real contradiction in all this. 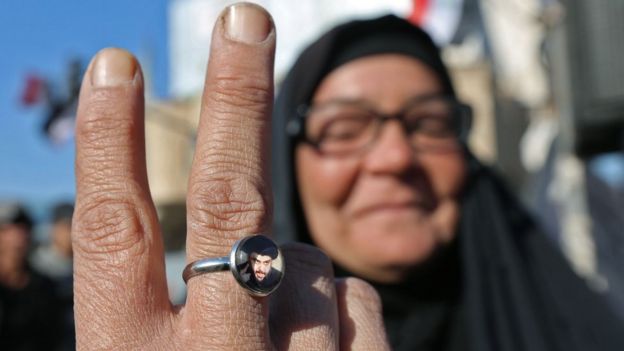 “He and his father have pursued a pretty consistent line as populist nationalist religious leaders in the context of Iraqi politics with its multiple power centres at home and abroad. This means that nobody is a permanent friend or a permanent enemy.”

“In Moqtada’s case, political ambivalence is exacerbated because he is, at one and the same time, leader of the biggest party in parliament, while his followers are playing a central role in the protest movement.

“He is part of the post-2003 Shia political establishment – though the rest of it does not like him – and simultaneously its chief opponent.”

As long ago as 2003, an aspiring Shia politician – the now-resigned Prime Minister Adel Abdul Mahdi – was warned by a friend: “Watch out for Moqtada. He has the streets.”

That remains the case today.

“If there is to be a resolution of the present crisis, then Moqtada would have to be at the heart of it,” says Patrick Cockburn.