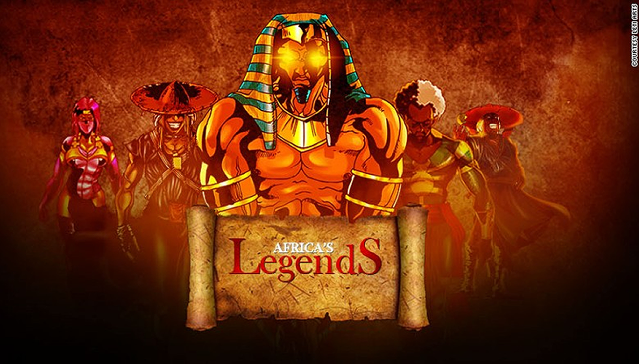 Leti Arts' first game, Africa's Legends, launched three years ago, and has since been downloaded more than 50,000 times for free, mostly by people in Egypt, Ghana, Nigeria, Kenya and some parts of the U.S. and UK.

Characters include Unnamed Pharaoh, an Egyptian who has been awakened from death by a cosmic event, and Wuzu, a Kenyan Masai warrior. Other game characters are The Unknown who is a ninja, and Rudy — the Nigerian daughter of fictional President Mubacha.

"The West has demonstrated a great success with the Greek mythologies as well as the Nordic myths," says Leti Arts' chief executive office, Eyram Tawia. "This is what Africa's Legends is going to do for us — bring our rich culture into the 21st century."

"Eventually came our Africa's Legends franchise, our flagship project in 2013, which comes in a series of digital comics and games based on African history and folklore," says Tawia.

"With this, we released the True Ananse Games and the Africa's Legends app."

Can you entertain and educate at the same time?

The Leti Arts team are keen to have the games teach people about African culture.

"The games we have so far, accompanied by the comics, teach our audience about our history and folklore that are dying out with our oral traditions," explains Tawia.

"The comics are meant to let the player get an in depth understanding of the characters' lives."

Tawia sees the education going further than just culture, he wants to teach Africans about health as well.

With a $100,000 investment from the Meltwater Foundation, and eight full-time members of staff, Leti Arts hope to boost Africa's economy.

"Our role with Africa's Legends is to prove the viability of gaming as an industry worthy of pursuit in Africa," Tawia told CNN.

"Already we have had success in empowering about 80 interns from tertiary institutions in Ghana. We have also mentored and encouraged 10 talented high school students to pursue degrees which allow them to follow their passion of developing games.

"The gaming industry will be available to absorb ready talents … which will in the long run reduce the unemployment rate in the developing societies."

"I want to see DC and Marvel comics license some of our characters for their African movies," says Tawia. "Then the rest will follow from there."