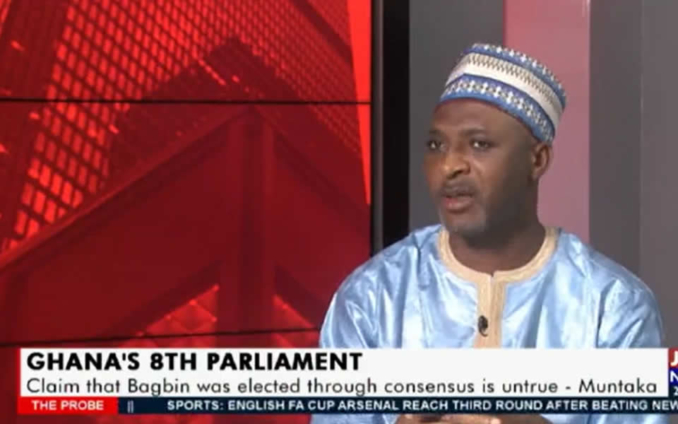 Member of Parliament for Bolga East, Dr. Dominic Akuritinga Ayine says MP for Asawase,  Muntaka Mubarak should have investigated the bribery allegations he made against a Supreme Court judge before making same public.

The Chief Whip of the NDC Caucus in Parliament had on January 10, 2021 revealed in an interview on JoyNews that the attempted bribe took place on the eve of the inauguration of the 8th Parliament.

According to him, his female colleague was being induced to vote for Prof Aaron Mike Oquaye as the Speaker as against the NDC’s Alban Bagbin.

“Shamefully, a Supreme Court judge called a lady colleague telling her what they will give her, if she votes for Prof Mike Oquaye. He told her that, they will help her take care of her children. She can take fuel from a filling station for free for the next four years.

“So we [NDC] are going to look into it. We will look at the time he made those calls,” he told JoyNews’ Emefa Apawu.

However, following condemnation for his utterances by the Ghana Bar Association as well as other members of the general public, Muntaka Mubarak has retracted and apologised for his statement.

In his retraction and apology letter he said, “Based upon good counsel, I have also decided to let sleeping dogs lie and will consequently refrain from any further public commentary on the matter which, as I have indicated was originally reported to me by a female colleague Parliamentarian.”

Alluding to parts of Mr. Mubarak’s letter, Dr. Ayine stated that the statement was issued to calm nerves and ensure that the relationship between the judiciary and the legislature is not ruptured.

“I don’t want any public comment that will end up doing damage to the reason why the statement has been issued,” he added.

Speaking on JoyNews’ Newsfile Saturday, Dr. Ayine stated that should the case have been pursued earnestly, it would have led to various public enquiries that would have soured relations between the legislature and the judiciary.

He also stated that when Mr. Mubarak received the report about a Supreme Court judge attempting to bribe an MP, he should have done the necessary checks before going public.

“Now ought he to have made it public before enquiring into its truthfulness or otherwise, he did not do so before going public and I think that, that is where he erred. If he had investigated, he would have found out that maybe the person who placed the call was not a Supreme Court justice after all or he was just pretending to be a Supreme Court justice.”

He further revealed that the NDC had initiated an investigation into the allegation but would not make their findings public.

“We actually went to MTN, got the numbers, and the calls that came to her, traced them, and so on and so forth.”