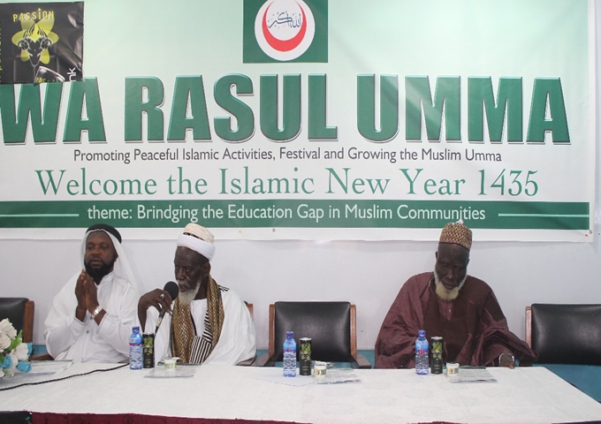 For the first time in Ghana hundreds of Muslims led by the National Chief Imam Sheik Doctor Nuhu Sharubutu gathered at the press center in Accra to officially welcome the Muslim New Year 1435.

According to Islamic tradition the Holy Prophet Mohaamed (S.A.W) under persecution from the people of Mecca took a journey from Mecca to Medina in A.D. July 16 ,622. This migration marked the beginning of the Islamic calendar and has since come to be known as Hegira in the Islamic world.

Sheik Amin Bonsu called on all Muslims to contribute to efforts to build more Islamic schools in Muslim communities to help strengthen Muslim beliefs in young and upcoming Muslims. Hajj Ibrahim Umaru based his speech on the lack of understanding of the holy Qur-an due to a huge language barrier which Ghanaians are finding difficult to overcome.

Imam Suleyman who gave the welcome address noted with concern that the celebration of the Islamic new year is news to many due to ignorance because after the month of Ramadan in which Muslims fast for 30 days and follow it with id-ulfitr and subsequent visit to Mecca to perform the hajj and also celebration of Id-ul adha, most Muslims do not follow the Islamic calendar and therefore not surprising that young Muslims and adults cannot tell the names of the months on the Islamic calendar like they have memorized the Gregorian and western calendar.

The event was organized by Wa Rasul Umma led by Hajj Issa Monnie and attended by representatives from the Ghana Muslim Mission, COMOG, The Shi-ite community and Ahali Sunna wal jam at.