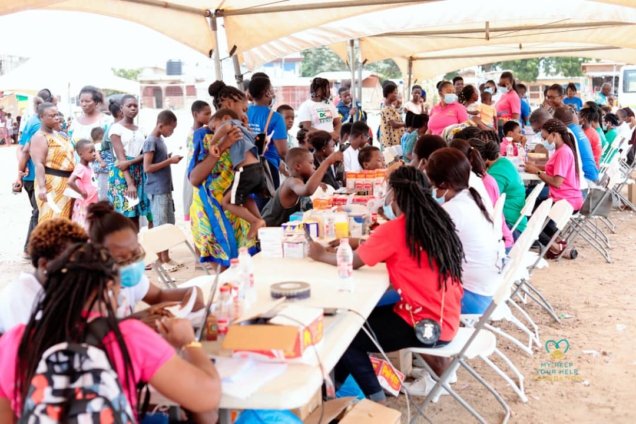 MyHelp-YourHelp Foundation, a Christian charitable organisation (NGO) with focus on education, health and social services, on Saturday, July 30, 2022, organised a free health screening exercise for the people of Ashiaman and its environs in the Greater Accra Region.

The health screening exercise, which has become part of the Foundation’s annual event, saw more than 700 people, including children being screened for various diseases including malaria, hypertension diabetes, and HIV/AIDS.

The beneficiaries were also sensitised for heart diseases, stroke, alcoholism and drug abuse, among others.

Those whose conditions needed further clinical diagnoses and treatment were referred to bigger health facilities.

The Foundation also teamed up with the National Health Insurance Scheme to register residents without a health insurance onto the Scheme, while those with expired membership had it renewed for them.

Speaking with the media after the exercise, Dr. Esiape said the gesture had helped to inform the people about their health status.

“Surprisingly we found a lot of children with blood in the urine and we intend to alert the District Director of Health,” he said.

Based on the discovery, he said, they were suspecting that the children with blood in their urine might be swimming in the river bodies around the neighbourhood, saying “So we have a high suspicion for Schistosomiasis.”

Dr Esiape, who is also the Medical Manager of Cocoa Clinic, has, therefore, advised parents in Ashiaman and its adjourning communities to discourage or prevent their children from swimming in the nearby water bodies.

He also called for mass treatment for the children in the Ashiaman areas by the District Health Directorate against Schistosomiasis.

He added, “So we encourage everybody to go to the hospital, have your BPs checked, have your sugar levels checked, and do a general medical examination. There are a lot of things in the body that until you are checked, you can’t tell what you have.”

The Founder and Chief Executive of the Foundation, Mr Nicholas Cofie explained that the foundation was established to make a difference in the life of the less fortunate people in communities by providing access to live’s basic needs including healthcare, quality education and other basic human needs.

He said the exercise was targeted at providing an opportunity for people, especially those who could not afford frequent medical check-ups due to financial constraints, to have access to medical care.

“It is important that once in a while, once every few months, the clinic is able to offer such a screening programme,” he said, adding that it provided an avenue for early detection, management and treatment of serious and sometimes chronic diseases.

Mr Cofie said he was excited about the successful outcome of the screening given what he called “the impressive turnout of people” to be screened.

For him, the screening was a social responsibility of the foundation to the community.

He also commended Cocoa Clinic, Widama Pharmacy, Dannex Ayrton starwin PLC and Kafnam Company Ltd for supporting the exercise with medical kits and drugs for the exercise, saying their sponsorship greatly contributed to the success of the event.