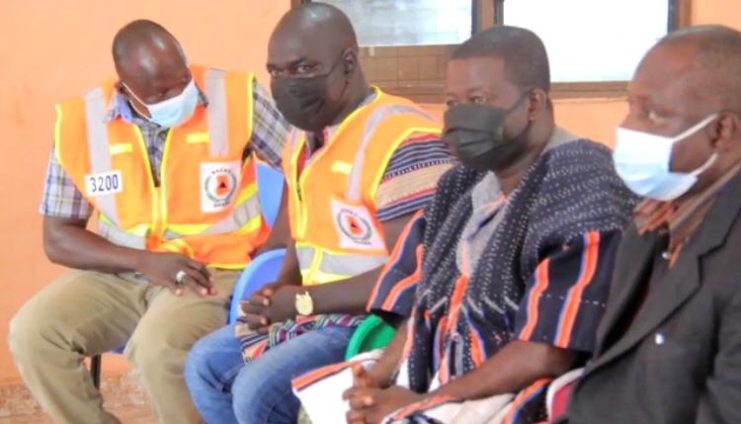 The Director-General of the National Disaster Management Organization (NADMO), Nana Agyeman Prempeh has appealed to residents living along the White Volta to relocate before the Bagre dam is spilled.

He noted that following the recent downpour, there is a possibility that the dam could be opened anytime soon

Mr Agyeman Prempeh made the appeal when he visited the chiefs to appreciate efforts employed to sensitize residents of the effects of the spillage.

According to him, government is worried about the destruction the flood is causing in the northern part of the county.

“We as NADMO and government are worried because we are losing lives and people are harvesting their maize and other crops immaturely which is not a good thing because it might affect food security in the area and the country,” he said.

He explained that because such an occurrence cannot be prevented, measures have been put in place to mitigate the effects.

“Government is ready and for the first time, NADMO has moved in with the officers and men of the 48 engineering of the Ghana Arm Forces, the marine unit and the police service. They are all here, ready to respond to whatever impact the Bagre dam spillage will cause,” he said.

The NADMO Director-General also gave the assurance that government is ready with relief items for the victims.

The chief of Tolon, Major (Rtd) Sulemana Abubakari, thanked NADMO for recognizing their efforts and pledged that residents will continue to support in every bit.

He advised NADMO to continue to use dialogue during the discharge of its duties.

Tolon Naa also bemoaned the undistilled drains and shoddy work by contractors who are offered projects to work on.

Mion Lana Abdulai Mahamadu also commended NADMO for coming to the aid of the people in the North and also preparing ahead of the spillage of the Bagre dam.

He urged the Organisation to continue to work and ensure they protect lives and property.