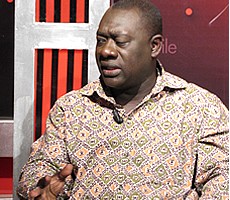 The Member of Parliament for Akwapim South, Osei Bonsu Amoah has scoffed at what he says is a clandestine move by government to solicit views on the way out of the ‘self-imposed economic mess’.

According to him, government’s call for a non-partisan economic forum to find solution to the current economic challenges is a subtle attestation that the “economy is in serious crisis”.

OB Amoah, who was speaking on Asempa FM’s Ekosii Sen programme Thursday, said President Mahama and his appointees could have saved themselves the embarrassment if they had been candid with Ghanaians about the true state of the economy.

He described as unfortunate how a once vibrant economy under the erstwhile Kufuor administration has gone from bad to worst due to the “ineptitude and incompetence of the propaganda driven Mahama-led administration”.

“Under President Mahama the economy is grinding to a halt and the cedi is the worst performing currency in Africa due to the reckless spending of government,” he added.

The Akwapim South MP was skeptical about the impact the National Economic Forum will have on what he described as a “tattered economy”.

He said a four day forum to brainstorm on ways to revive the economy is not the panacea to the challenges confronting the nation.

“The reality is that the economy is in serious crisis and government is overwhelmed and yet they won’t acknowledge it,” he stated.

OB Amoah was convinced the economic dialogue will be another “talk shop” because “government has turned a deaf ear to the wise counsel from the large pool of experienced economists in the country”.