NBA preview: All you need to know ahead of the 75th anniversary season - MyJoyOnline.com

NBA preview: All you need to know ahead of the 75th anniversary season 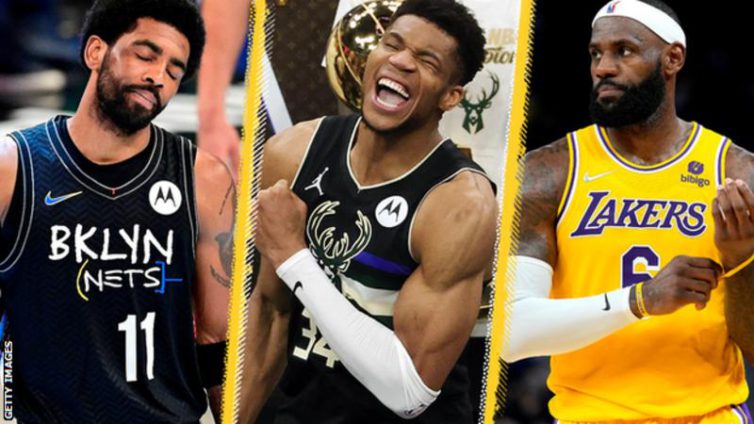 A Hall of Fame-bound player who refuses to be vaccinated. A superstar point guard desperate to find a new team. And one of the greatest of all time desperate to prove he’s still got it.

As the NBA celebrates its 75th anniversary, it promises to be a season full of twists and turns.

It’s been three months since the Milwaukee Bucks, led by Giannis Antetokounmpo, defeated the Phoenix Suns and were crowned NBA champions for the first time since 1971.

In doing so, Antetokounmpo, nicknamed ‘The Greek Freak’, silenced many of his critics and was also named the Finals’ Most Valuable Player (MVP).

After a busy off-season which featured some eyebrow-raising trades, the league starts again on Tuesday night (00:30 BST Wednesday).

Here are some of the key factors which could play a part in where the Larry O’Brien NBA Championship trophy ends up next summer.

Is it Championship or bust for the Brooklyn Nets?

Ask most experts and they’ll tell you Brooklyn is the most likely destination for the title. Although that prediction comes with an ‘if’ – if they can get their big three – Kevin Durant, Kyrie Irving and James Harden – on the court at the same time.

Before a ball has even been tipped that projected journey has hit a bump in the road.

“In New York City, in order to work in an indoor public space you have to be vaccinated. And Kyrie Irving has taken the stance that he is not going to get vaccinated which would make him ineligible to play games,” explained Chris Carrino, the Nets’ play-by-play announcer.

“I think it’s fair to say that there’s a high expectation level to win the championship, but if they don’t win it, it’s not a disaster,” he added.

The Nets were heavily favoured to win the title last year but injuries meant their star-studded trio only played a handful of games together.

Irving’s salary for the upcoming season is $33m (£24m) – so if he remains ineligible to play there is the possibility he could be traded to a state where Covid rules are not as strict as they are in New York.

“I hope that Kyrie, despite how strongly he feels about the vaccination, ultimately decides to get vaccinated because I’d love to see him play basketball this season,” NBA commissioner Adam Silver said on the eve of the new season.

“This is between Irving and New York City right now. This is not a league issue… but I think it would have been best for everyone if every player were vaccinated.”

If Irving leaves New York a straight swap deal for Philadelphia 76ers point guard Ben Simmons has been touted as a possible solution.

However, the 76ers are thought to be keen on keeping the 25-year-old three-time All-Star.

The Australian is unhappy with his team and initially failed to report to pre-season training, although he’s since joined up with the squad.

Not only has LeBron James spent more than half of his life in the NBA – he’s consistently been one of its best performers. Now aged 36, the big question is how much longer can that last?

The four-time NBA champion missed a chunk of last season because of an ankle injury then returned only for his Los Angeles Lakers to be eliminated in round one of the play-offs.

Often debated alongside Michael Jordan as the game’s GOAT, James will be eager to prove he’s still the main attraction. He’s used his influence to convince long time friend Carmelo Anthony, 37, to join him in L.A.

Also back in the famous purple and gold jersey is Rajon Rondo, 35, who previously played for them in 2018-2020. Key to any hopes the Lakers have is how well nine-time All-Star Russell Westbrook, signed from the Washington Wizards, fits into their system.

It’ll be the 32-year-old’s fourth team in three years.

With his all-action displays he’s proven he can be the main man – what James and the Lakers need him to be is a good co-star. A role Westbrook is yet to warm to so far during his 14-year NBA career.

‘The league is Giannis’ for the taking’

It’s no surprise that after winning their first title in 50 years the city of Milwaukee is still on a high following victory in the summer.

It’s thanks largely to Antetokounmpo – who at times can be impossible to guard. At 6ft 11in and 110kg he’s been described as the most dominant force in the league since Shaquille O’Neal.

And if that wasn’t scary enough for the opposition – the 26-year-old hasn’t peaked yet according to those that watch him week in week out.

“I really hope there’s not a sense of being content especially among the players. I’m hoping they come out with that fire and get back to the championship game and win another title,” Nathan Marzion told BBC Sport. The 21-year-old writes for Behind the Bucks website.

“I think Giannis can be more dominant than he was last season. I see him averaging 30 points a game, shooting 70% from the free throw line and improving his jumpers. The league is his for the taking,” Marzion added.

Thanks largely to the acquisition of Kyle Lowry from the Toronto Raptors, the Miami Heat could be this year’s surprise package.

Lowry an NBA champion in 2019 brings the experience and leadership skills that will complement the Heat’s squad of young talented players.

The same could be said for the signing of PJ Tuckerwho, who was part of the Milwaukee Bucks’ title winning team last season. Add to the mix All-Star players Jimmy Butler and Bam Adebayo and the Heat could have one of the deepest squads in the league.