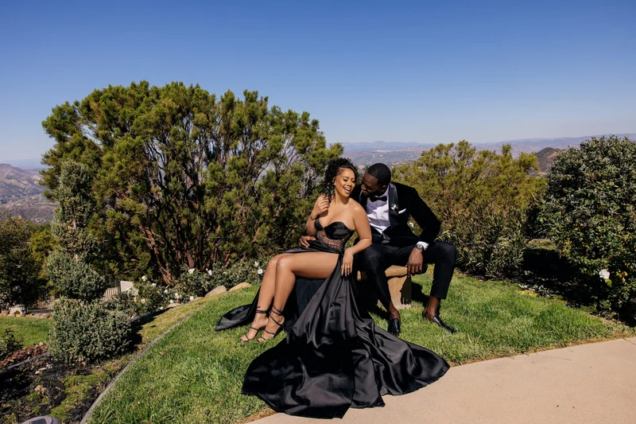 Hazel Renee and Draymond Green go way back. When the actress first met the NBA star, it was long before he was a four-time champion, even prior to when he first stepped foot on a professional basketball court.

They became acquainted as students at Michigan State University, where she ran track and field and he took the Spartans to two Final Four appearances and a Big Ten tournament championship.

“We were in the same theatre class and both athletes,” she tells ESSENCE. “Naturally we gravitated towards one another for group projects because we were already familiar with each other.”

However, the two didn’t end up making a love connection at that time. He would enter into the NBA in 2012 and she would focus on a burgeoning acting career that would later include a recurring role on Fox’s Empire.

But the two would eventually reunite years later, meeting up in Los Angeles for a first date. It was memorable for being simple and sweet.

“We went to a rooftop pool and hung out at the cabana all day, which is still one of our favourite things to do together,” she says. “We hadn’t seen each other in a very long time so we hung out all day, talked, and caught up. It was really casual but also reflective of our relationship. We really are best friends.”

Now the two besties in life and love are married, saying “I do” on August 14. To celebrate their next chapter before they walked down the aisle, they posed for a stunning engagement shoot, snapped by prized wedding photographer Stanley Babb of Stanlo Photography and set up by planner Diann Valentine.

They were photographed in two regal looks, Renee in gowns by Phylicia Ellis and Green in suits by Eaden Myles.

“We had an overall vision to reflect where we currently are in our lives. We feel very elevated from where we were years ago. We are more connected and in tune with one another and wanted our shoot to reflect our style and natural boss energy,” Renee says, with a laugh.

They’ve also created quite the life together since they reunited. They have a daughter together named Cash and two children, Olive and Draymond Jr., both from their respective previous relationships. They’re also constant travel companions, which is their favourite thing to do together.

“We have been to so many different countries and have truly experienced a lot together,” she says. “We are both every adventurous and have so much fun. I love being able to explore the world with him.”

She looks forward to doing a lot more of that as husband and wife. When asked before Sunday’s ceremony what she was looking forward to most about the big day, it was making unforgettable memories with the individuals who have been rooting for them since day one.

“I’m looking forward to celebrating our love and this new chapter in our lives with the people who have been down with us from the very start,” Renee says. “To have the support of family and friends is priceless.”

See the beautiful images captured from their engagement photo shoot below and congratulations to the happy couple!