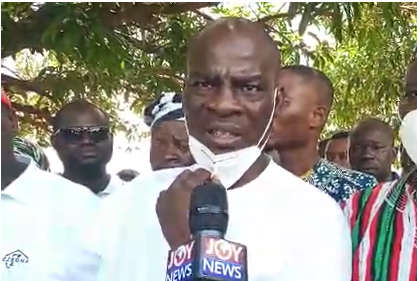 The Minority Leader in Parliament, Haruna Iddrisu has disclosed that the National Democratic Congress (NDC) under the leadership of former president and flag bearer of the party will raise $1.5 billion for cocoa.

Speaking to the residents of Bibiani in the Western North Region, he stressed that out of the $1.5 billion raised, $200 million will be dedicated to cocoa roads throughout Ghana.

“When President Mahama resumes office again as President of the Republic, every year Government through him as president will raise $1.5 billion for cocoa. Out of that $1.5 billion, every year $200 million will be dedicated for constructing cocoa roads throughout Ghana,” he said.

The Minority Leader stressed that the John Mahama-led administration before leaving office started the construction of the roads but upon leaving office, the NPP discontinued it in order to do an audit on the project.

“The NDC was already constructing cocoa roads, but the NPP came and stopped the projects and said they were undertaking an audit. Where is the audit report? Where is the wrongdoing?” he asked.

The New Patriotic Party (NPP), halted the construction of the cocoa roads across the country in 2017 over allegations of inflated cost among other wrongdoings by the NDC.

Former President John Mahama challenged government to publish the audit report of cocoa roads which accused him of awarding over 230 road contracts to the tune of ¢3.5 billion under the cocoa roads project to the detriment of Cocobod’s finances.

However, The Chief Executive Officer of Cocobod, Joseph Boahen Aidoo has said the report of the audit conducted on the construction of cocoa roads in some parts of the country cannot be made public.

According to Joseph Boahen Aidoo, the report was meant to assist the management of the projects, stressing that individuals who are interested in it must go through the required application process.

Speaking in an interview with JoyNews’ Evans Mensah on Top Story, he emphasized that the Mahama administration did not give Ghanaians value for money in awarding of those contracts.

Although he fell short of the specific amount saved through the audit, he disclosed that “we saved hundreds of millions.”

For the Minority Leader, the only wrongdoing that exists is the one inflicted on the people of Ghana by the NPP in stopping the construction work on the cocoa roads.

DISCLAIMER: The Views, Comments, Opinions, Contributions and Statements made by Readers and Contributors on this platform do not necessarily represent the views or policy of Multimedia Group Limited.
Tags:
Election 2020
John Dramani Mahama
Minority in Parliament
NDC and NPP manifestoes