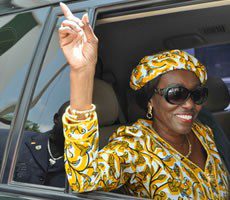 The Volta Regional Secretariat of the National Democratic Party (NDP) on Wednesday said it had uncovered and estranged a mole within its ranks.

Dr David Sunu, NDP National Youth Organizer, told journalists at a press-conference that one Mr Emmanuel Ashigbui had attempted luring constituency chairmen of the NDP back into the National Democratic Congress (NDC).

He said the mole, parading as an Executive Member of the NDP allegedly invited the NDP executives to a meeting at a venue in Ho, during which he tried cajoling them to agree to announce their en-bloc desertion of the NDP in the presence of the media.

Dr Sunu said the attempt smacks of the politics of deception which is “the hallmark of the NDC”.

He said the mole’s maneuvering was aimed at creating the impression that the NDP was losing its hold on its members and executives.

Dr Sunu then declared, “we the National Executive Committee (NEC) members from the Region, Regional Executives, Constituency Chairmen and members of the great National Democratic Party wish to put on record that we are solidly behind the NDP”,

He continued “we believe in the true ideals of probity, accountability, social justice and integrity in governance.

“The NDC cannot deliver governance with integrity to this country.

“We of the Volta Region had to put this on record because of attempts by the NDC to deceive our constituency chairmen into a meeting with media coverage to create an impression that they had defected to the NDC.

“To avert such further deception we wish to put on record that the element who was used in this attempt, the person is not an executive member of the NDP and nobody should deal with him in that capacity.

“The NDP will never be deterred by cheap and infantile strategy of deception.

“We shall continue to maintain our members based on the politics of conviction and the principles we stand for.

Messrs Andrews Agbeve, Samuel Avulekpor and Governor Fianyo constituency chairmen corroborated Dr Sunu’s account of the events, all saying the NDC mole had told them that he was an emissary of President Mahama, working to bring them back to the fold.

When contacted Mr Ashigbui agreed he had organized the constituency chairmen at their own bidding, for a possible defection to the NDC because, they claimed they (the chairmen) were not satisfied with the happenings in the NDP.