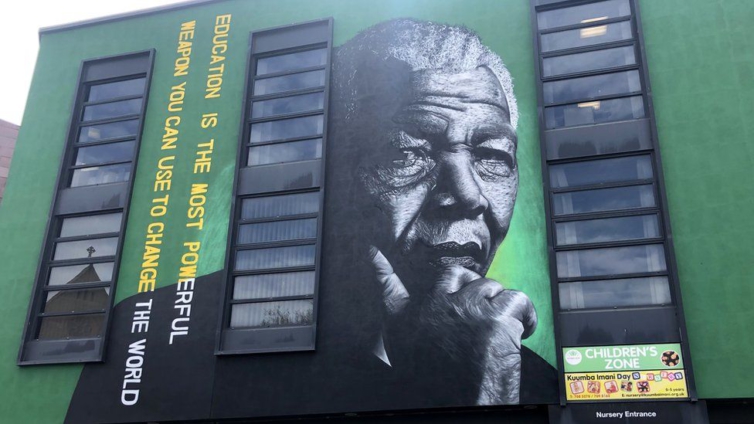 The artwork in Princes Road, Toxteth, includes a quote from the South African great

A mural of Nelson Mandela has been unveiled in Liverpool ahead of a planned visit by his family.

The artwork in Toxteth pays tribute to the South African leader, who was given Freedom of the City of Liverpool in 1994 for his role in ending apartheid.

Stephen Nze, ambassador for charity Mandela8, who commissioned the piece, said he hoped the mural would “inspire people to stop and think”.

“We chose Nelson Mandela’s quote ‘education is the most powerful weapon we have to change the world’ as we want to encourage young people to look around and learn about the world for themselves,” he said.

The city has always nurtured close links to the Mandela family after the black community campaigned vociferously against apartheid in the 1980s.

In 2018 Dr Makaziwe Mandela donated her father’s drawings for a permanent display in Liverpool’s St George’s Hall, which she showed to Prince Charles in 2019.

The mural on the Kuumba Imani Millennium Centre building on Princes Road is the first of two new memorial pieces being created in the area.

A memorial garden in the city’s Princes Park will be unveiled by Dr Mandela and granddaughter Tukwini Mandela in July.

It includes a bridge across the lake, a pavilion and inscriptions of Mr Mandela’s quotes.

The family visited the site of the garden in 2019 but the project, which was due to be completed in 2020, was delayed for two years due to the coronavirus pandemic.

Sonia Bassey, chairman of Mandela8, said the mural unveiled this week would form the start of a planned heritage trail through leading to the memorial garden.

“It shows we are a strong and vibrant community, and it will be seen by thousands of people travelling on this major route into the city centre,” she said.

“We’ve already seen a real excitement about this work and it will become a major attraction.”

Mr Culshaw, who recently created murals dedicated to Beatles drummer Ringo Starr and Liverpool footballer Mo Salah, said it was “incredible” to be part of the project.

“People passing by have been stopping and talking to me non-stop about it,” he said.

“Everyone loves it, which is fantastic.”