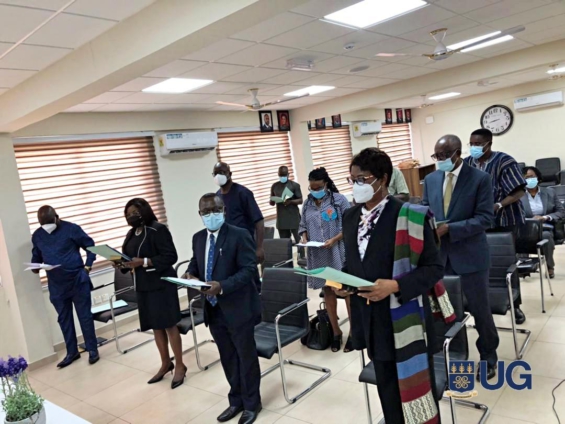 Government has inaugurated a new Governing Council for the University of Ghana. The 20-member Council, is to be chaired by former Chief Justice, Sophia A. B. Akuffo.

The announcement and swearing-in of the Council follow the expiration of the tenure of the old Council on May 31, 2021.

The Sophia Akuffo-led Council assumes office barely a week to the end of the tenure of the current Vice-Chancellor of the University, Prof. Ebenezer Oduro Owusu.

At a short swearing-in ceremony, Education Minister, Dr Yaw Osei Adutwum said the Council must endeavour to consolidate the gains made by the University in the past and better position it as a world-class institution of higher learning.

“We have full confidence in them as they have been appointed by the President. However, we have also asked them to understand that, we live in a global society, and the university’s global competitiveness should be their concern.

The others on the council are included in the list below.

The first assignment of the Council will be to oversee the appointment of a replacement for the outgoing Vice-Chancellor.

Already, the University has been dragged before an Accra High Court over alleged irregularities in its search for a new Vice-Chancellor.

The plaintiff, Patrick Justice Ennin, who is seeking to injunct and ultimately nullify the entire work done by the search committee, argues that the committee was illegally constituted.

The University’s statutes demand that ‘one year before the post of Vice-Chancellor becomes vacant, or when the post is vacant, the Council shall appoint a search party or committee to propose a successor for the Council’s consideration’.

But with just five days to the end of the current Vice-Chancellor’s tenure, the University is yet to conclude processes for the appointment of his successor.

If the reliefs are granted, the University of Ghana may be heading for a leadership crisis as the committee, which was established in September 2020, will have to restart the entire process.

In January 2021, the Search Committee announced that it had received seven applications for the position.
The applications included those of Professor Nana Aba Appiah Amfo and Professor Felix Asante, both Pro Vice-Chancellors in charge of Academic and Student Affairs and Research, Innovation and Development.

The plaintiff alleges that the “inclusion of Vesta A. Nunoo and Prof. Baffuor Agyeman-Duah as two of the three representatives of the University Council on the Search Committee, was in breach of prevailing law; as their tenure, as members of the Council, had expired before their nomination.”

Even though the Statutes of the University do not say that the three people to be nominated by Council unto the Search Committee, must necessarily be members of the University Council, Mr Ennin believes the intended interpretation of the provision is in the statute and hence is seeking a declaration from the High Court to that effect.

Meanwhile, Professor Nana Aba Appiah Amfo, one of the applicants for the position, has been appointed as Acting Vice Chancellor.

According to a press statement signed by the University’s Registrar, Mercy Haizel-Ashia, the decision was taken after the inauguration of the new Council.