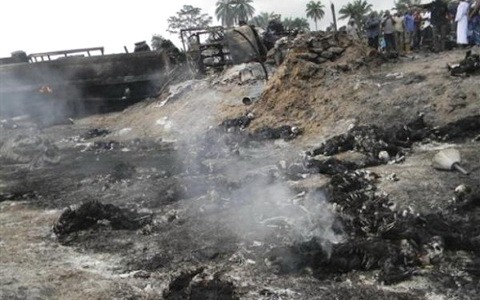 More than 100 people have died in southern Nigeria after a tanker carrying petrol crashed.

The authorities say the vehicle did not immediately burst into flames so nearby villagers rushed to collect the fuel.

But the tanker then exploded, burning many of them to death.

Journalist Emeka Idika told the BBC a mass burial for those burnt beyond recognition would take place in Rivers state and about 35 people had been taken to hospital.

He said the death toll might be higher as some people from the nearby village of Okogbe were on fire as they ran into the bush – and their bodies had not yet been located.

Another journalist, Oluchi Iwuoha Chimezie, told the BBC she had counted more than 100 bodies.

Nigeria’s National Emergency Management Agency said in a statement that so far 95 bodies had been recovered.

“Early this morning a tanker loaded with petrol fell in Okogbe and people trooped to the scene obviously to scoop the spilled fuel and suddenly there was fire resulting in casualties,” Reuters news agency quotes Rivers state police spokesman Ben Ugwuegbulam as saying.

A photographer for the AFP news agency at the scene said many of those killed were drivers of motor-bike taxis, known locally as “okadas”, who raced to fill up their tanks after learning of the crash.

Such disasters are not unusual in Nigeria.

Many hundreds of people have died over the last decade when trying to take fuel leaking from pipelines that have broken or been vandalised.

Nigeria is a major oil exporter, but millions of its citizens live in poverty.