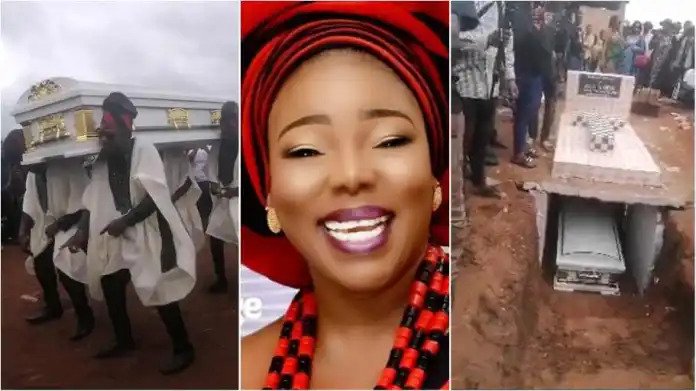 It was an emotion-laden atmosphere in Benue State, where Nollywood actors and actresses gathered to bid farewell to one of their own, Ada Ameh, on Friday morning.

The talented actress, who died in a Warri, Delta State hospital on July 17, was laid to rest in her home town, Ogobia, in Otukpo LGA.

Her best friend, Empress Njamah, was captured at the funeral crying uncontrollably. Last week, the cast and crew of ‘The Johnsons’ held a night of honour to celebrate her life and times.

The event tagged ‘The Johnsons Night of Tribute for Emuakpor’ was held at Freedom Park, Lagos.

Shortly before the late actress was laid to rest, Charles Inojie, one of her closest friends in the industry, penned an emotional tribute to her.

Mr. Inojie, her onscreen husband in ‘The Johnsons’, captioned the tribute ‘It’s A Wrap For Ada Ameh’.

He wrote, “there lies a chip in us. Deadpan and ice-frozen. There lies a broken heritage wrapped in a funeral encasement. In that air-tight wooden bed is our naked truth. No matter the differences we nursed, You can never tell how much of us is in them.”

“There again is a grim call. A charge to everyone. That none is promised tomorrow. That we may live today as the best of days. We are spreading love beyond the bounds of our comfortable thresholds. Till the twilights dim on the hour not foretold. When the once sonorous symphony fades forever on the morbid horizons of life’s ‘curtain fall’.”

Delivering a sermon at her night of tribute last week, Sylvester Ebhodaghe, a pastor, noted that from his brief encounter with her, the late actress truly loved God.

He said that she loved God with all her heart, and she said it with her mouth.

“It is more about you that are left. How are you running your race? What life are you living? She’s lived her life.

“We are all God’s creation. Nobody is born into this world by chance. Nobody is here without a purpose. Everyone has a purpose, but whether or not you will fulfil that purpose remains to be seen.

“Ada has lived her life. She has fulfilled God’s purpose for her life. Now she has to report back to the one who sent her. Ada is not dead. She is sleeping. But a day is coming. At the sound of the trumpet, Ada will rise,” he said.

Born on May 15, 1974, in Ajegunle, Lagos, the famous actress lived an eventful life, starring in some of the most critically acclaimed Nollywood movies.

Her breakthrough role was in the 1996 film ‘Domitilla’ which incidentally received a reboot this year.

From there, she featured in many acclaimed feature films and TV series.

Until her demise, she played Emuakpor Johnson in the long-running TV series ‘The Johnsons’.

Two years ago, she lost her only daughter, Aladi God gift, a sad incident that the late Ms Ameh said she never really got over.

DISCLAIMER: The Views, Comments, Opinions, Contributions and Statements made by Readers and Contributors on this platform do not necessarily represent the views or policy of Multimedia Group Limited.
Tags:
Ada Ameh
Death