No Ghanaian was involved in Lampedusa boat accident 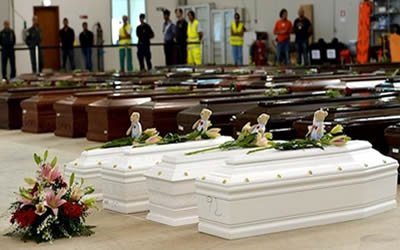 Government says contrary to initial reports that Ghanaian illegal immigrants were involvement in the recent boat disaster off the coast of Lampedusa in Italy, that is not the case.

A statement from the Ministry of Information and Media Relations states a "team was dispatched from Ghana’s mission in Italy to Lampedusa to ascertain the veracity of reports that some Ghanaians had lost their lives in the accident".

The statements adds that the team after days of thorough investigation, found no evidence of the involvement of Ghanaians in the disaster.

"The team however, discovered that a Ghanaian, Sulley Hamidu, was among a group of migrants who arrived safely in another boat a week before the tragedy", the statement signed by Deputy Minister Felix Kwakye Ofosu revealed.

Italy held a state funeral for the hundreds of migrants who died after their boat capsized close to the island of Lampedusa last Thursday..

Divers recovered 302 bodies from the wreck.

Of more than 500 people who had been on board the boat, mostly from Eritrea and Somalia, only 155 survived.