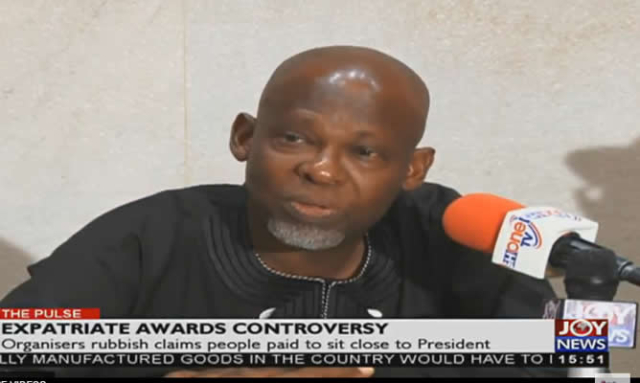 Millennium Excellence Foundation (MEF)  has rejected claims it sold seats to expatriates willing to pay as much as $100,000 to sit close to the President at an awards dinner.

The event organisers which patterned the Trade ministry to organise the Ghana Expatriates Business Award (GEBA) stressed at a press conference Wednesday, "no one paid 100,000 dollars to sit close to the president before that event."

The push-back comes as pressure grows on the presidency to come clean on the extent of its knowledge of the simmering cash-to-sit-close-to president scandal.

Already the Trade minister Alan Kyrematen has been summoned to explain his ministry's role in the organisation of the awards.

The MEF is, however, offering a public explanation of the controversy which the Minority NDC is bent on instigating a parliamentary probe.

President of the Foundation Ashim Morton said different categories of sponsorship, determined the sitting arrangement, a common practice in the event organising industry.

It also had the President's Gold Table reserved for "persons carefully selected by the Foundation and the Ministry of Trade."

Such distinguished persons could be expatriate or Ghanaian and did not have to sponsor the event to secure a seat there.

Even though he admitted that they had a list of sponsorship package which included paying $100,000 to sit by the President's Gold table, he was quick to add that  none of the business men who sat on this President's Gold Table paid $100,000 before the event.

There were 18 persons on the President's Gold Table.

"Not one person paid a $100,000 to sit on that table", Mr. Morton said and explained Japan Motors whose representative sat on that table with the president did not pay even a dollar or a cedi.

" The office of the president cannot be toyed with," he said rejected profiteering claims.

Speaking on its relationship with the Trade Ministry, the President of the Foundation said there was an agreement that the ministry would keep a portion of the funds raised for the event.

"What I know is that some funds were released to organise the event and thereafter some additional funds were given to us post-event. I don't know whether those funds were complete"

He said the event was funded by "ordinary Ghanaians" and expatriates who believed in the cause of the awards.

He however did not say how the funds were raised.