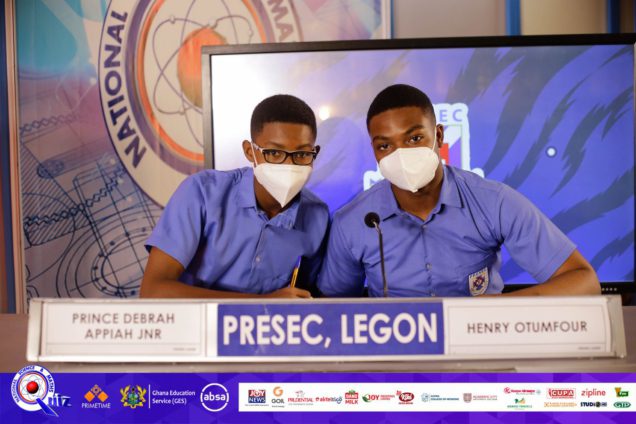 Interacting with JoyNews‘ Manuel Koranteng on Thursday ahead of the final on Friday, one of his colleague contestants, Aboagye Joel, disclosed that, “he is okay by God’s grace…he is doing fine,” he said.

On Tuesday, Otumfuo was substituted by Joel after Round One of their semi-final contest against St Peter’s and Chemu SHS.

Information gathered by JoyNews was that Otumfuo was unwell; therefore, he had to be substituted and given medical attention.

The OTUMFOUR was out from the competition because he became dizzy immediately after the first round of the competition this sad for PRESEC.
Otumfour will come back stronger 💪.#NSMQ2021 #CalebYeslordWorld pic.twitter.com/JIVAJzVDmu

During the interaction, the Odadie Boys said they trust in God to make them victors.

They said they never underestimated any of their contenders, which is why they have another opportunity to grab the trophy.

“No matter what school you are facing, there is just a little bit of nervousness because it is not the name of the school.

“It is about which student is there, what the student has learnt, how passionate, driven and prepared they are. But in the end, we trusted our God to deliver, and he has shown that he is with us.”

Meanwhile, the six-time winners say they are poised to win the seventh trophy this year.

According to the team, with the help of God and the adequate preparations made, victory is assured.

“We are in high spirits. We have put in a lot, sacrificed a lot and given a lot into this. Despite how challenging and competitive it will be, we don’t expect it to be easy. But it is in the difficult times, God shows his light, who he favours and how much you mean to him.

So we believe very strongly that we will be bringing the seventh trophy,” Joel said.

The contest will commence at the Kwame Nkrumah University of Science and Technology after a closing ceremony scheduled for 2 pm, according to Managing Director of Primetime Limited, Nana Akua Ankomah-Asare.

The 2021 National Science and Maths Quiz (NSMQ) is produced by Primetime Limited and sponsored by the Ghana Education Service (GES) in partnership with Absa.

The broadcast of the much-anticipated finals will be aired on JoyNews and Myjoyonline.com.