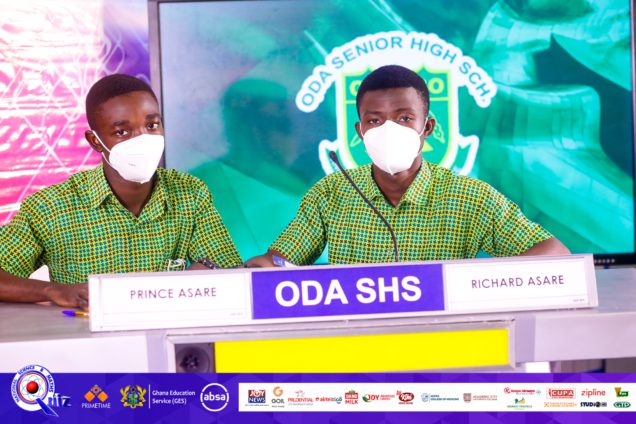 Oda SHS has ended the quest by Takoradi SHS to win the 2021 National Science and Maths Quiz (NSMQ) trophy and the associated bragging rights.

Thursday’s contest featuring Navrongo SHS and the aforementioned schools left supporters of Oda SHS celebrating with chants while those of Takoradi SHS held on to what could have been.

With 1 point margin, Oda SHS eliminated Takoradi SHS and progressed to the quarter-final stage of the contest.

At the beginning of the contest, Bernard Blankson and Gideon Manu of Takoradi SHS led the race but lost grip of the lead position in Round Two and Three.

Oda SHS represented by Prince Adare and Richard Asare moved from the second position to the “numero uno” spot.

Although Takoradi SHS did not lead the contest in Round Three, they managed to win the Prudential Life NSMQ Star worth ₵2,400 for getting the Problem of the Day correct.

Saarah-Mensah:
Problem of the Day scores –

Round Four saw Takoradi SHS rise from the ashes to claim the lead position once more. Oda SHS was following close by.

Saarah-Mensah: Congratulations 🎉 to Oda SHS for qualifying to the quarterfinal and for being seeded for next year.#NSMQinKumasi #NSMQ2021 #Primetime pic.twitter.com/mNzCGsZRKP

In Round Five, Oda SHS upped its game and gained more points.

Although Takoradi SHS managed to answer the last riddle correctly, it was too late to fix what had broken.

They exited the race with 36 points.