PRESEC's NSMQ finalist receives admission to 14 universities in US - MyJoyOnline.com

PRESEC’s NSMQ finalist receives admission to 14 universities in US 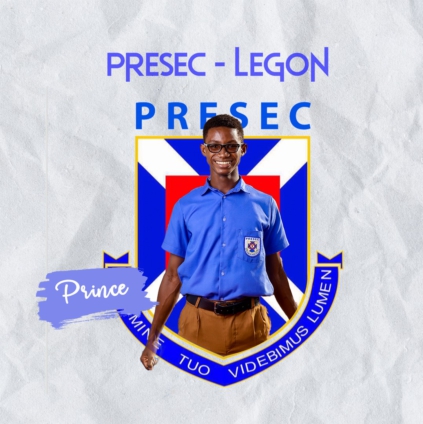 A member of the 2021 National Science and Maths Quiz (NSMQ) team for the Presbyterian Boys’ Senior High School (PRESEC) has gained admission to 14 prestigious universities in the United States of America.

Prince Appiah Debrah Jr, who was considered an anchor of his team, was given “generous support” by the universities.

The offers are from; Massachusetts Institute of Technology (MIT), Stanford, UPenn, Columbia, Cornell, Northwestern, Carnegie Mellon, the University of Michigan, and Ann Arbor.

According to sources, Prince intends to study mathematics and computer science at the university with special interests in algorithmic reasoning, artificial intelligence and human-computer interactions.

Prince, Jr. obtained his basic school education at The Light Academy, Adenta where he was the School Prefect.

He graduated as the second-best candidate in the Basic Education Certificate Examination (BECE) in the entire Adenta district in 2018.

He furthered his education with his first-choice school, the Presbyterian Boys’ Senior High School at Legon, becoming the President of the Math & Science Club.

He was part of the team that represented PRESEC in the 2021 NSMQ in the nail-biter finale in Kumasi, losing narrowly to Prempeh College.