NSS personnel demonstrate in demand of their unpaid salaries - MyJoyOnline.com

NSS personnel demonstrate in demand of their unpaid salaries 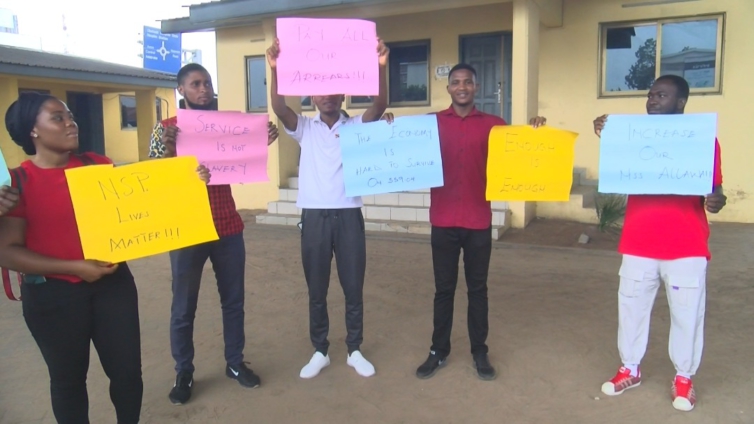 A group calling itself Coalition of Suffering National Service Personnel took to the streets of Accra today to demonstrate over their unpaid allowances.

Clad in red and wielding placards, the group says their three months salaries which are in arrears must be paid.

According to them, the delay in payment of their allowance is causing financial hardship due to recent price hikes of goods and services.

Although there was a low turnout, the organizers were firm in their quest and demand.

The demonstration which started from the Obra sport in Accra, ended at the Parliament House where a petition was presented to the Speaker, Alban Bagbin.

JoyNews/AdomNews · NSS personnel demonstrate in demand of their unpaid salaries

Speaking to JoyNews, the President of the Group, Weachea Awaregya said NSS personnel want their money in order to survive.

He also asked that the NSS allowance be reviewed to meet the current economic status in the country.

“We are suffering. We are living in a time where everything is difficult. Salary workers are suffering, everybody is currently suffering and we are living on a national service allowance of 559 and that is not enough.

“Aside from the fact that the money is small, it is not being paid on time,” he stated.

Scores of National Service personnel took to social media in March to lament their unpaid allowances, saying the situation has made life difficult for them.

The National Service Scheme then apologised for the development and said the delay was not deliberate. It assured of working around the clock to pay all outstanding arrears.

After paying for the month of January 2022, the monthly allowances for March and April are yet to be released.

Members of Parliament including Samuel Okudzeto Ablakwa have since called on the government to intervene.

He described the delay as “most unfair and insensitive,” given the current harsh economic conditions.