Nyantakyi rounds up enthralling testimony by recounting his achievements - MyJoyOnline.com

Nyantakyi rounds up enthralling testimony by recounting his achievements 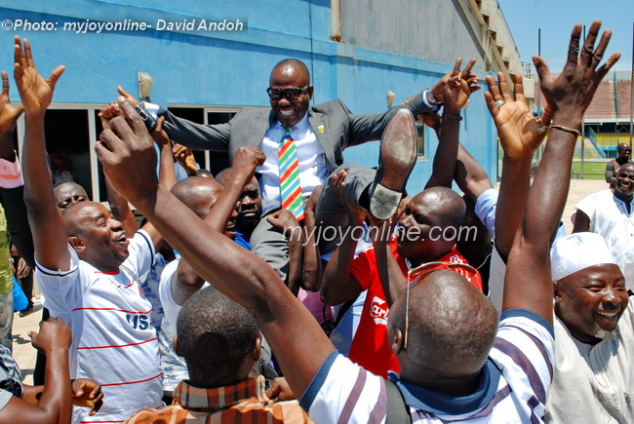 President of the Ghana Football Association, Kwasi Nyantakyi, appeared to warm the hearts of the Commission looking into Ghana’s appearance at the 2014 World Cup, when he enumerated the strides the association under his leadership has led Ghana Football to make.

Appearing on the third consecutive day to respond to issues, Nyantakyi dazzled with his answers on pertinent issues relating to the relationship between the GFA and government as well as various operational systems and suggestions for improvement.

Before the Commission discharged him, a smiling Nyantakyi took the two hours the Commission interrogated him on the day to clear what he called misconceptions about the work of the FA.

“My Lord, people sometimes forget where this FA took over from. This FA has done a lot to see Ghana Football to where it is. Ghana at the time did not even have kit sponsorship. The Black Stars and other national teams were so unattractive. When we went to the 2004 Olympic Games, Ghana had to use three strips. The top was Nike, down was Mingle and the hose was Puma. Now thankfully through the work of this FA and the improvements in the performance of the Black Stars under this administration, we have Puma which is kitting all our national teams.

“The first sponsor of the Black Stars was Guinness. But in reality Guinness was just a donor. They gave us GHC10,000 per match. We in 2005 asked Guinness to regularize that relationship into a sponsorship. Today, thanks to the good work of this FA, we have a lot of sponsorship for the Black Stars,” he said.

“My Lord, at a time, there was no sponsorship even for the local league. In 2006, the sponsorship from Onetouch for the premier league was just 350,000. But with the efforts of the FA, we managed to get a Glo sponsorship of 3million dollars and now have a sponsorship with first capital plus of 2million. We are still working to improve it and attract more sponsorship.

“Today, the FA has been able to put up its own secretariat with staff we pay and motivate well to run the FA,” he added.

Mr. Nyantakyi also touched on the significant improvements in the performances of the National Teams.

“My Lord, the performances of all the National teams have also improved significantly. Between 1984 and 1990, Ghana did not qualify for any African Cup. Under this FA, Ghana has qualified for every single African Cup making it to the semi-finals of four of those tournaments. Until this FA, Ghana had never qualified for the World Cup. We have qualified Ghana to the World Cup and done so for three successive World Cups and now Ghanaians have even taken qualification to the world cup as given. The last time, someone asked me how we are preparing for 2018 in Russia.

“The Under 20 team under my administration has won the World Cup. The Junior teams have become a regular feature at the World stage.

“We don’t say we are perfect but we have made strides which are worth noting,” he stated.

Kwasi Nyantakyi thanked the members of the Association who had supported him tremendously throughout the years and at the Commission.