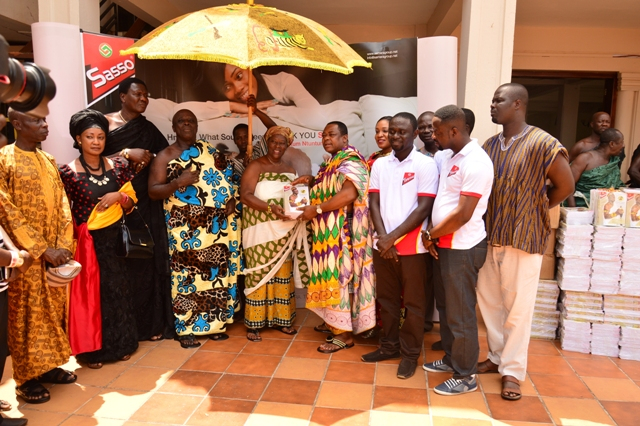 The books have the Okyenhene’s picture and Sasso logo embossed on them, at a cost of over GHâ‚µ150,000.00, with the pens. Other items presented to the Foundation were cartons of Sasso Insecticide spray and mosquito coil, and a cash donation.

The presentation was made on Monday, November 2, 2015 at the Okyenhene’s Palace in Kyebi, Eastern Region, where he also hailed the management of Sasso for introducing the Sasso Brand of products onto the Ghanaian market which is effective in killing flying and crawling insects without any side effect and controlling malaria.

According to a board member of Sasso, Nana Dr. Appiagyei Dankawoso I, Samara Company Limited has followed with keen interest the work of the foundation, and so decided to support it operations with the items.

Nana disclosed that Sasso partnered with Okyenhene in this regard because traditional leaders are the custodians of the land and have direct relations with the people; adding that more of such gesture will be extended to similar institutions.

The Marketing Manager of Sasso, Mr. Sedrick Nartey Ologo, disclosed that the move was in harmony with the company’s corporate social responsibility to promote basic education in Ghana.

He recounted that 100,000 copies of branded exercise books were distributed nationwide between December 2014 and July 2015, and said the nationwide gesture will be repeated in the coming weeks.

Receiving the items, the Okyenhene said there was no better investment in the lives of children than educating them, adding that Sasso’s initiative was on course to prepare the school children for success.

His Majesty Amoatia Ofori Panin said education remains the fulcrum of growth in every town, city and nation, thus no matter how endowed a country is in terms of natural resources, it can never grow or develop without education.

“This gesture is a great investment in the lives of the children, given the fact that education is key and holds the growth of every town, city and nation in the world,” Okyenhene stated.

He advocated better conditions of service for teachers, saying they are the main force behind education, and stated that “What a country knows determines what the country has”, therefore, good teachers produces good future.

She said the books will be distributed to the queen mothers of Okyenman for disbursement to school children in their respective towns.

Later, the Okyenhene and the group were at two selected schools in the Kyebi Municipal Assembly to give out some of the books to the pupils.

The schools were Municipal Assembly (M/A) Experimental Primary and JHS and Christ-Head Institute, all in Kyebi. Each school was apportioned 1000 copies of the Okyenhene-Sasso branded exercise books.

In all the school presentations, Osagefuo Amoatia Ofori Panin appealed with the teachers to give off their best in training the pupils.

He also urged the school children to be respectful to their teachers and parents; to take good care of the books and always remember to keep their environment clean.

The 2015 Eastern Regional representative of Ghana’s Most Beautiful, Adjoa Afariwaa Dawson, was there to pay homage to the Okyenhene and also to encourage the pupils to take their studies seriously.