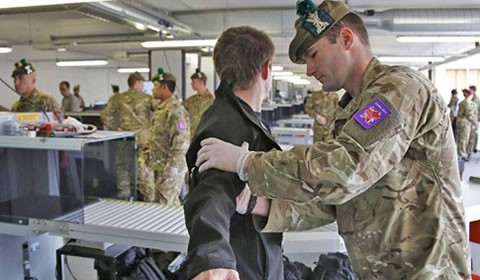 British lawmakers tore into the chief executive of the security contractor that will be unable deliver enough guards for the Olympic Games, forcing Nick Buckles to agree Tuesday that the fiasco is “a humiliating shambles for the country.”

Buckles, the chief executive of G4S, said the company should not have agreed to provide 10,400 guards for the Olympics, six days after the security giant admitted it could not do so.

“We regret signing the contract,” Buckles said under pressure from lawmakers.

The company’s failure forced the government to call in 3,500 military personnel to help.

Buckles told Parliament’s Home Affairs Committee he was surprised when he got his first indication on July 3 that his company would be unable to fulfill its contract.

The information came “completely out of the blue,” he said.

He knew for certain on July 11 the company could not fulfill its contract, he said.

Hammered by committee chairman Keith Vaz over saying he was “disappointed” about the failure, Buckles first said he was “deeply disappointed” and then that he was sorry.

Labour lawmaker David Winnick then laid into Buckles, insisting several times that the snafu was “a humiliating shambles.”
Buckles finally said he could not disagree.

He repeatedly tried to evade a question from lawmaker James Clappison about whether he was confident about the number of guards who would show up on the first day of the Games.

Vaz intervened again, demanding: “You can’t give Mr. Clappison the assurance he seeks?”

G4S has a £284 million ($444 million) government contract to provide security guards for the Olympic Games, but only 4,000 guards are trained and ready, says the committee, which is looking into security for the Games.

Buckles said he expected 7,000 to be ready by the time the Games begin on July 27.

Home Secretary Theresa May, who is responsible for domestic security, was called to Parliament to answer questions from lawmakers on Monday after the fiasco.

She insisted that G4S actually had more than 20,000 accredited security staff members and that until last week, it appeared that they would have too many contractors rather than too few.

The Home Office said Monday that the contractor was suffering from a software problem, which meant it could not guarantee who would turn up where and whether guards had the right training.

G4S has not responded to CNN questions about the accusation.
Share your Olympics sights and sounds

The Home Office also said that the extra immigration staff deployed at borders was properly trained, rejecting media reports to the contrary.

Heathrow airport expected a record number of passengers on Monday as athletes began to flood into the city for the Olympic Games, which start a week from Friday.

Immigration desks have extra staffers, Heathrow said Monday, amid fears of long lines to get into the country.

Retired border officials and retired police officers are among those being brought in to supplement immigration staff, the Home Office said.

Athlete arrivals are expected to peak July 24, with more than 1,200 competitors due on that day.

See how Heathrow is preparing for the London Olympics
G4S said Saturday that it stands to lose up to $77 million after failing to recruit enough staff.

The airport, meanwhile, said Monday that it is deploying more than 500 volunteers who speak 20 languages among them to welcome athletes and officials.