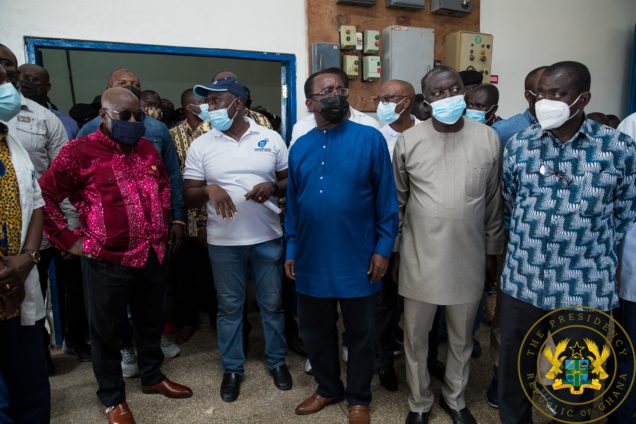 President Akufo-Addo has visited the premises of Darko Farms, the oldest private and largest poultry farm in Ghana.

The President visited the facility, whose operations have been revamped through Government’s 1-District-1-Factory initiative, on Saturday, October 2, 2021.

Darko Farms was a household name in Ghana and dominated most supermarkets and distribution outlets for fresh chicken, particularly in Kumasi and Accra.. However, the company went through a period of decline, due to major challenges that confronted the domestic poultry industry in the late 1990s. These included high cost of feed, inefficiencies across the value chain, high electricity and operational cost, as well as competition from cheap imported poultry products.

As part of Government’s Industrial Transformation Agenda, being implemented by the Ministry of Trade and Industry, Darko Farms Company was identified as one of the distressed but potentially viable companies.

As a result, the company, in 2017, applied to be part of the flagship 1-District-1-Factory initiative, and after a comprehensive review by the Technical Support Group of the Ministry, an amount of GH¢22.1 million was granted as a loan facility to the company by Ghana EXIM Bank.

The amount was earmarked to revamp the company’s operations, by upgrading the plant and equipment, retooling the hatchery, feed mill and processing facility and as working capital.

The company has also applied part of this facility to establish an out-grower scheme, where a number of poultry farmers are supported with broiler chicks, feed as well as technical assistance to breed their birds.

In addition, the company has a feed mill with an installed capacity of 96 metric tons of feed per day, and a storage cold room of 500 metric tons.

Darko Farms is currently engaged in negotiations with the Mohinani Group to become the major local supplier of processed chicken for Kentucky Fried Chicken (KFC) restaurant chain. KFC, through its local supplier has indicated its preparedness to off-take 100,000 birds monthly from Darko Farms under YUM certified conditions.