Over 30,000 people to walk against breast cancer in Ghana 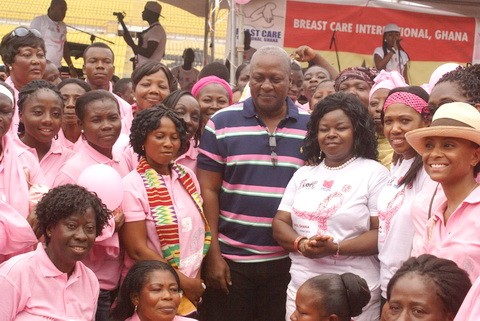 One woman dies of breast cancer every 69 seconds globally and in Ghana it is the leading cause of cancer related deaths. The stark reality is that many women who have died from cancer in Ghana reports late to the hospital making surviving very slim for many women.

The revelation was disclosed by president of Breast Care International, Dr. Wiafe Addai, at a media launch to mark this year’s International Breast Cancer Month. The event scheduled for the 26th of this month will involve a walk from the Obra Spot to the Accra Sports Stadium to create awareness for the disease.

Statistics indicate that there are 458,000 deaths per year from breast cancer worldwide making it the leading cause of female cancer deaths in both the developed and developing countries.

The President of Breast Care International, Ghana and Africa’s leading non-governmental organization championing awareness creation for early detection and treatment of breast cancer said “women need to be aware of the disease and not be scared about it”.

Breast cancer strikes earlier in black populations and although its cause remains unknown, early detection can lead to prompt treatment to save lives.

Dr. (Mrs) Wiafe Addai reminds women that “breast cancer is a disease curable at the hospitals and it is also survivable”.

Available statistics indicate that 2,062 new breast cancer cases and 1,137 breast cancer deaths were estimated annually in Ghana. This alarming situation calls for a concerted action to find solutions to this canker, she said.

Late presentation has been considered as a challenge with an average of 60% of women reporting either at stage three or four when it has been with them for at least ten months before seeking any medical consultation.

Global efforts to control breast cancer have focused on early detection with evidence indicating that diagnosing breast cancer at an early stage can reduce mortality, allowing for more treatment regiments and earlier initiation of appropriate therapy.

BCI in collaboration with Peace and Love Hospital is leading an effort to fight against breast cancer through awareness, prevention, treatment and research.

Making women aware of the disease remains the most effective means of spreading knowledge about breast cancer and BCI in recognition of this fact would climax the ‘Pink Month’ celebrations with the Ghana Walk for the Cure Event on the 26 October at the Accra Sports Stadium.