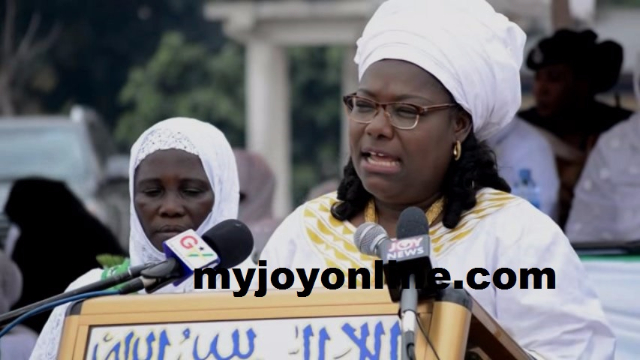 Ministry of Gender, Children and Social Protection says, children learning languages other than their mother tongue could serve as a foundation for building a peaceful society.

According to the sector Minister, Nana Oye Lithur, says women must emphasize peaceful co-existence to children in their care so they can tolerate others.

She believes if children learn and speak one or two other languages besides their mother tongue, they will better appreciate other people and their culture.

Nana Oye was speaking in Kumasi, at the 37th National Annual Convention of the Lajna Imaillah of the Ahmadiyya Muslim Women Association of Ghana.

The Minister reminded the Muslim women that Ghana is not any special from other countries which have suffered the scourge of war.

She pointed out such nations, including Ghana’s neighbours, which were plunged into unpleasant situations because the people failed to live in peace.

“I believe that as individuals if we continue to promote values that enhance our peaceful coexistence in our societies we will enjoy socio-economic growth, political stability and ultimate happiness for all,” she intimated.

In attendance also was Attorney-General and Minister for Justice, Marietta Appiah Brew-Oppong who re-affirmed government’s commitment to public security, especially, during the election period.

This year’s conference of the Ahmadiyya Muslim women was under the theme, 'Peaceful Co-existence in our Contemporary Society; a Concern for All.

Ameer of the Ahmadiyya”‹ Muslim Mission Ghana, Mori Ahmed Thima, stressed what he describes as inner peace as condition for a peaceful society.