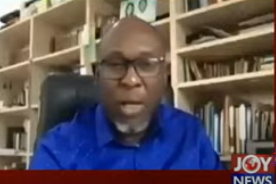 Senior Vice-President of Imani Africa has blamed the excesses in public expenditure by the Executive arm of government, on Parliament’s failure to check the practice.

“I think that they (Parliamentarians) come into the shot because they are not helping. Parliament is supposed to be the bulwark against the Executive’s excesses.

“So this is where they should have managed to pass legislation or do certain things to cut back on some of these things and restore confidence in governance. But you have people in Parliament who have taken ex-gratia four times, every four years get a 4×4,” he said.

His comment comes at a time when members of the general public have expressed opposing opinions on whether or not the spouses of the President and Vice President deserve to be paid salaries based on a recommendation by the Prof. Baidu Ntiamoah-Baidu Committee. The recommendation was approved by the 7th Parliament of Ghana.

Apart from members of the general public, the MP for South Dayi, Rockson-Nelson Dafeamekpor, Former Chief Executive Officer of the Volta River Authority (VRA), Charles Wereko Brobbey among others, have kicked against the initiative that would enable Mrs Rebecca Akufo-Addo and Mrs Samira Bawumia receive salaries and allowances. They contend that it is unconstitutional.

Whiles the South Dayi MP has filed a suit at the Supreme Court to challenge the recommendation, Mr Wireko Brobbey has petitioned Speaker Alban Bagbin to halt its implementation.

“I will explain that the principle that there should be some sort of allowance for First and Second Lady in the Republic is a very sound one, I can defend it anywhere, but there is nothing I can say to defend that they should continue to enjoy it after their husbands leave office, that won’t make sense.

“When we look at the specific issue of paying spouses of Presidents, we should focus more on the principles, it matters that the public has lost that confidence. We should interrogate the principles of that idea.

“Let us find out the merits of the principle and we find out how do we do this legally and in a way that does not lead to a situation where one day, someone awards themselves a million dollars a month,” he said.

Mr Bentil attributed the opposition to the recommendation by some concerned Ghanaians to the perception that state officials do not have the spirit to serve.

“In this Fourth Republic, the conduct of our leaders, and generally the elite, what we elusively call the political class, they come into office and go. They have constituted a predatory elite and what that means is that we have come to believe these people have no intention to serve. They come into government, they occupy offices to better themselves.

“Many of them cannot afford the kind of lifestyle they demand when they are in office and you consistently see this happen that is why the public has lost confidence that these are people who are here to serve,” he added.