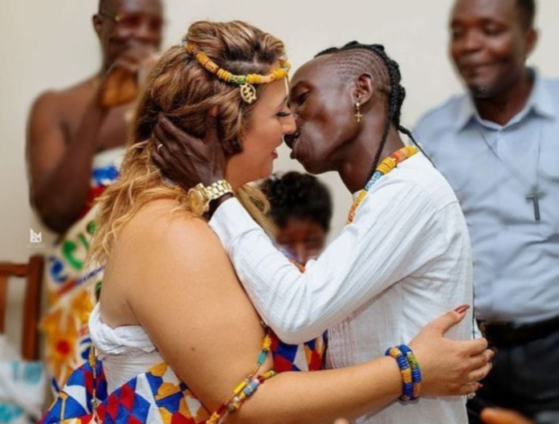 Information reaching AdomOnline.com indicates the One Corner hitmaker, Patapaa Amisty, is no longer married to his German wife, Liha Miller.

The couple tied the knot in a ceremony on Saturday, January 2, 2021.

They had first performed some traditional rites before having a white wedding at an event that took place at Agona Swedru in the Central Region.

However, fresh revelations indicate Liha Miller and Patapaa have not met each other for some months despite welcoming a baby together.

Meanwhile, Liha Miller has been spotted in Ghana and Nigeria over the past four months.

She has been spotted shooting skits and chilling in clubs without the company of her husband.

The speculations have since been rife on social media although Patapaa is yet to officially confirm or deny the story.

In an interview with AdomOnline.com, Patapaa’s father, Kwesi Amoah, debunked the divorce rumours but confirmed the couple is separated.

He explained that they are legally married in court hence it cannot be said that his son is no longer married to Miller.

He asked the media to refrain from putting out such information until Patapaa confirms the matter via his official social media pages.

Meanwhile, efforts by Adomonline.com to reach the One Corner hitmaker have proved futile.