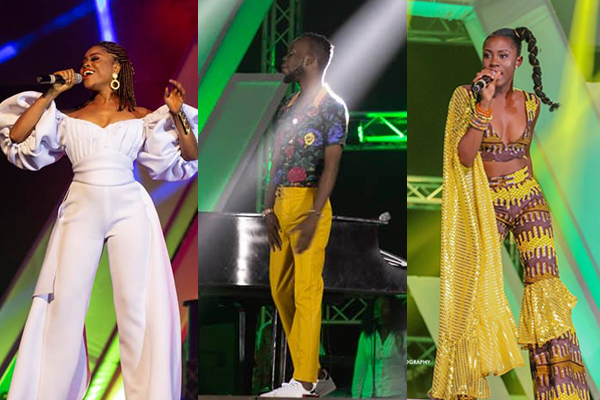 The second edition of the much anticipated 3Music Awards came off at the Fantasy Dome on Saturday, March 30. The event had its ups and downs but the one thing that kept the audience excited was the performances.

From the first act, Shatta Wale, to the last act, Samini, the artistes entertained the crowd with back to back hits despite the technical challenges.

If performances could start a fire, the amazing stage put together by 3Music Awards organisers, would be set on fire by artistes.

With their electrifying performances, even the air condition could not keep the heat out of the fantasy dome and no amount of water could douse the fire they brought on stage.

Patrons drank and drank but the performances were too much and water was not enough to wet their throats dry from all the shouting, dancing and jumping.

Let us start from the very beginning.

The anticipation was high and patrons could not wait any longer for the show to begin, little did they expect to go for the best ride of their lives.

Before then Aba, walked into the Fantasy Dome at 7pm and thought people were not going to come to the event.

She had to check her ticket again to see if she missed the time. “Seven it said, so why is the place missing a few thousand people? Where was La Meme Gang, Kwesi Arthur, Medikal, Dawumi, Samini and all the advertised people?”

Sighing where she sat, at least her VIP tickets gave her the luxury of a table. After what seemed like forever, the patrons began to fill the place and artistes arrived for the show to begin.

All her frustrations and anger at the latecomers and organisers drifted away when the DWP dancers first took the stage. To say their performance was captivating is an understatement.

All too soon they were done but the crowd did not have the chance to request they do it again because, a car was driven onto the stage announcing the arrival of the SM Movement president. That was just a distraction because the Shatta Movement president came from the sky, literally! He got everyone wide-eyed.

Performing ‘Island’, ‘Ayoo’ and some songs from his Reign Album, Shatta Wale started the fire. He had not come in with the usual energy, maybe because the show had started late.

After seeing Shatta Wale perform, patrons were treated to music from the next generation, the future of Ghana music. Amazingly all they did was raise the temperature and fan the already burning flames started by SM Movement president,

Cina Soul came first with a brilliant live performance of her ‘Ojorley’, displaying breathtaking skills in singing and dancing. Never for once did she falter in her steps, her stagecraft or did her voice lose the energy she came with. That girl has one hell of a talent!

Kofi Mole, winner of the Next Rated Act Award sang his new single ‘Don't be Late’. He got into the Kwesi Arthur like mood (taking his shirt off) and had the crowd jumping and singing with him.

MTN Hitmaker winner and Black Avenue signee, Freda Rhymz, swept the crowd away with her rap bars from her single ‘Pay’. The sexy dancing was just a side attraction.

Then the audience freaked out when Dope Nation entered the building singing ‘Naami’. The duo also got people singing along to their 2018 single ‘Eish’.

All went crazy when ‘Proud Fvck Boys’ by Tulenkey began playing. Tulenkey got the crowd dancing with him. His stagecraft, however, did not have as much power as people were expecting but he did good.

The audience sang along more when Eddie Khae joined him on stage to perform ‘Do the Dance’, the crazy viral song.

It was back to back fire performances from these new acts. Quamina MP certainly did not disappoint when he got people jamming to ‘Party’ and ‘Wiase Ye De’, even the VIPs could not sit.

It was evident the next generation through their performances were promising one thing and one thing only: to protect the Ghanaian sound and never let the music die.

It was a touching moment when Wendy Shay dedicated her award to the late Ebony, just to remind people that late songstress still reigns.

When Sunday came, the Bethel Revival Choir led a ‘goosebumpy’ worship with angelic voices and devotion that could shake the heavens.

The praises started with ‘Agbadza Medley’ and Agbadza, a traditional dance of the Ewe’s where you move your arms like a chicken flapping its wings, Neho!

He may not have been billed to perform but when Adofo Jnr, the son of highlife legend Obuoba J.A. Adofo, gave a thrilling performance with back to back songs of his father, the crowd yearned for more.

Performances would not have been complete without AMG baby! Motorcycles led the way for Medikal, the Hiphop/Hiplife Act of the Year,  crowd wanting more and wishing the night never ended. From his verses in ‘Kpo Keke’ to ‘Ayekoo’ everything was on point like punctuation!

He got the audience fanning themselves when he joined the VIPs in dancing and singing to his rap verses. And when Ayekoo began playing, even the little girls could not stay still. The disappointment, he left too early, the audience were not ready for his exit because ‘Omo Ada’ was still playing.

Shatta Wale had to cry because he was overwhelmed with emotions and shocked at the love his fans had for him to win his sixth award for the night.

Also, Twitter could not believe Ghana owned Akwaboah. One user wondered if he was listening to Bruno Mars play. With him on the piano and a band behind him, Akwaboah started with his nominated song ‘Hye Me Bo’.

Even with all the hot performances, It was chilling when Adina joined him on stage to perform ‘Hold Me Down’, they got the audience swaying in unison to the love song.

Maybe, Adina could have gotten Akwaboah too on her ‘Killing Me Softly’ song. Their stagecraft was captivating, they held hands through the rest of their performance. Tee Phlow also joined the songstress on stage to perform ‘Fakye’.

Adina and Akwaboah performs ‘Hold Me Down’

In her hot pink outfit and with exotic dancers, Shay took the stage to sing ‘Bedroom commando’, ‘Uber Driver’, ‘All for You’ and ‘Masakraa’.

“If I no come 3Music Awards wetin I gain” Victor Ad had said. The 3Music African Act of the Year had crowd excited when he mounted the stage to sing his hit single ‘Wetin we Gain’.

The temperature was already high but LA Meme Gang and Joey B raised it higher with their vibrant performance of ‘Godzilla’, ‘Stables’, and ‘Balance’.

Grammy Award nominee, Rocky Dawuni, was awesome with his band but of course, his performance would not have been complete without playing for the audience his rendition of Alhaji K Frimpong’s ‘Kyenkyen Bi Adi Mawu’.

Dancehall artiste, Samini, performed last and indeed the last is definitely not the least. He and his band were beyond great throughout their performance, there might not be a word for it. Sadly, many people had already left so the full impact of his performance could not be felt.

Dancehall artiste, Shatta Wale took home the most award for the night, eight in total.

3Music Awards had a lot of issues, it did not start on time, transitions were not the best, the audience waited for quite sometime before Akwaboah’s performance began, Samini performed too late but performance wise, many of the artistes gave their all.

After all was said and done, Aba recalled, she had read somewhere that the Creative Arts is Ghana’s untapped oil. From cartoonists, advertising agencies, movies to music and many more, the country has not explored the talents and the performances proved just that.