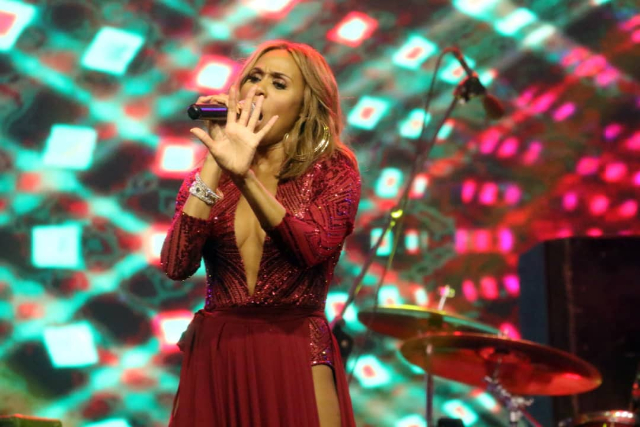 For the numbers that made it to the first of the two-day Ghana World Music Festival at the Fantasy Dome at the Trade Fair Saturday night, they will attest to the fact it was a great event.

While attendance was not as expected, the event never lacked at the music side.

It was everything anyone could have wished for at a quality concert – great sound, good lighting and the most talented acts ever to have graced the music stage.

The Ghana World Music Festival is part of a long list of activities earmarked for the celebration of the Year of Return. This year is exactly 400 years after the first enslaved Africans arrived in Jamestown, Virginia.

It was therefore not surprising to see a huge number of music lovers from the diaspora at the concert.

They simply did not want to miss the electrifying performances that talented Canadian-born singer Deborah Cox, Jamaican’s Third World, Irving Mayfield from the US, South African’s Ernie Smith and Ghana’s music maestro Kojo Antwi had to offer.

One by one, these top billing artistes truly did rock the venue.

Ernie Smith on guitar and backed by a Jazz set treated patrons to a soothing array of classic pieces like ‘Love Don’t Hurt Me Again’, ‘Ten Years Free’, and ‘Lonely’.

After that welcoming performance, one of Ghana’s finest DJs Andy Dosty warmed up the venue with some impressive mixes. He got patrons jamming to popular tunes like ‘Linda’, ‘Angelina’, ‘My Level’, ‘Mane Me’, ‘Can’t Let You Go’ and a host of others.

Irvin Mayfield took the stage after that. On trumpet, he did a live rendition of ‘Ready or Not’ followed by a jazz rendition of ‘If I Rule The World’.

He also skillfully freestyled with the trumpet, backed by a female singer and a male rapper. Irvin Mayfield performed a tribute song to late South African trumpeter Hugh Masekela and capped his performance with ‘Redemption Song’ by Bob Marley.

After another musical interlude by Andy Dosty, MC for the night, Nathaniel Attoh emerged on stage to introduce the ‘queen of the night’, Deborah Cox.

Deborah Cox, wearing a very beautiful wine dress was quick to let patrons know how elated she was to be performing in Ghana.

She swiftly got down to business after that. She kicked off her performance with ‘Where Do We Go From Here’, a song she dedicated to her husband after 20 years of marriage.

The Canadian-born singer did an electronic dance version of her smash hit ‘Who Do You Love’, followed by ‘Starting With You’, ‘We Can’t Be Friend’ and the evergreen ‘Sentimental’.

She invited four ladies on stage to sing ‘Sentimental’ and they simply wowed the crowd with their renditions of the song.

Third World has so much energy and life. Formed in 1973, they performed as if they were formed just yesterday.

They got patrons dancing to songs like ‘Now That We Found Love’, ‘Reggae Ambassador’ and ‘Forbidden Love’.

Kojo Antwi – the best was surely and definitely saved for last. He proved on the night that music maestro tag was no fluke.

Backed by his band, he took patrons down memory lane dishing out some of his evergreen tunes.

It would have been strange to see anyone sitting as he performed songs like ‘Medofo Pa’, ‘Kakayi’, ‘Tom And Jerry Aware’, ‘Amirika’, ‘Akyekyede3 Nante3’, ‘Me Nya Ntaban’, ‘Adiepena’, ‘Akonoba’. The dance floor was chocked with dancers.

Kojo Antwi’s performance was the perfect icing on an impressive concert that ended at the wee hours of Sunday.

Day two of the Ghana World Music Festival continues at the Fantasy Dome at the Trade Fair on Sunday with performances from Samini, Jupitar, Gasmilla, Lamisi. There will also be a DJ Session.

Maxwell Amoofia and Nasiba Yakubu also contributed to this article