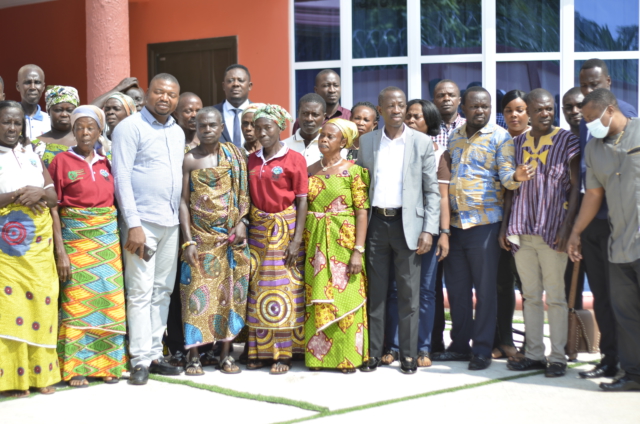 In Ghana, 55 percent of children living in agricultural households are reportedly engaged in child labor.

Over 90 percent of these children engage in at least one form of hazardous work.

The Adansi South District in the Ashanti region is one of the many communities in Ghana confronted with the worrying trend.

Farmers and officials within the district say the lack of educational resources and poverty push many farmers to engage in the act affecting the future of many children within the school going age.

Adansi South is home to over 90,000 people with three-fourth of the population engaged in food and other crop production.

Abject poverty and lack of educational resources are a few of the root causes of child labour in the area.

Speaking with journalists, Isaac Obeng Manu, a cocoa farmer in New Edubiase disclosed that they are compelled by the high cost of living to go with their wards to the farm.

“Because most of us do not easily make ends meet, we are compelled to ask the children to go to the farm with us to help us cultivate and harvest,” he said.

A number of school-going children in the 450 communities within the district are into child labour.

According to the District Education Director, Ebenezer Asare, the growing menace is affecting school attendance.

He said the lack of educational resources in these remote areas drive many students away.

“If the child goes to school and meets the multi-grade system where two classes are joined and taught by only a teacher, the child will not be happy coming to school. They would rather follow their parents to the farm.

“We wish there would have been a way out. For instance, the district directors could be allowed to recruit trained teachers domiciled in close proximity to the remote areas, where teachers from other places find it difficult living.  Also, teachers posted to communities far from their places of abode should be given some additional 20% of their salaries as an incentive,” he said.

As the primary State advocate against child labour, the Social Welfare Department in the district is challenged when it comes to logistics.

“There are over 400 communities within this catchment and we can’t use our own resources to visit these places. We need help. The government must support us with some little logistics including fuel, vehicles with megaphones, etc,” he said.

He indicated that most of the communities visited by the office do not report cases of abuse for fear of being tagged as “bad members”.

In a bid to eradicate the growing statistics, Nature Aid Ghana is providing financial and infrastructural support to the communities.

Executive Director, Joseph Baradoe says “the project has supported communities like these in what we call Self-help initiative. We’ve supported the community to build their own kindergarten school blocks. We’ve also provided them with access to loans to support their farming business”.

The project is in collaboration with DKA Austria. DKA is a development cooperation agency of Katholische Jungschar under the Catholic Children’s Movement in Austria.