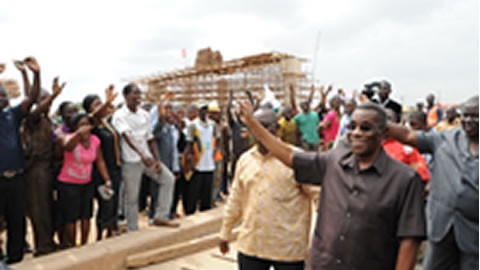 President John Evans Atta Mills has inspected ongoing works on the Accra-Kumasi highway project, and urged contractors working on delayed portions of the road to speed up work.

Beginning his tour from the 3.5km Achimota-Ofankor stretch of the highway, President Atta Mills commended the contractors for the impress progress of work.

According to President, he has noticed a significant improvement since the last time he visited the site in the middle of last year and urged the contractors, China Wuju (Group) Corporation, to ensure that they leave a good a lasting road.

The President was also happy with the completed 9.3km Nsawam Bypass which has been developed to ease the traffic on the main Nsawam road.
His Excellency President Atta Mills last stop, was the “thorny” Kwafokrom-Apedwa stretch of the highway.

In spite of the fact that there has been some sturdy progress on the 37.1km Kwafokrom-Apedwa Junction stretch of the highway, President Mills expressed deep concern in respect of the inconvenience that motorists go through, and entreated the contractors to do everything possible to ease the suffering of commuters.

According to President Atta Mills, the concerns of motorists continue to hit him on a daily basis hence his move to once again visit, so as to have a first hand feel of the extent of progress.

“I can see that there is some progress, and I also know that you want to do a thorough job but you must also understand that the patience of commuters has a limit and so all must be done to ease the pain of persons who ply this route” President Atta Mills said.

President Mills reminded the contractors of the importance of that road, which is under the Accra-Kumasi Dualisation Project, and urged all stakeholders to work together to ensure that the project was not delayed unduly.

He also apologized to motorists and commuters for the inconvenience the construction was causing, and urged them to bear with the situation since the project would be for the benefit all Ghanaians.

He expressed his administration’s commitment to the provision of quality infrastructure to aid national development, saying the government would work to have the major road projects completed on time.

President Mills, who interacted with the contractors, workers and residents communities along the stretch, also tasked the Roads and Highways Ministry to ensure the necessary resources were made available to the contractors of that the project could be completed on the re-scheduled date.

Briefing the President at the Apedwa-Nsawam portion of the project, Joseph Omani-Mensah, the Resident Engineer for the Ghana Highway Authority, indicated that the Kumasi bound lane would be fully completed and opened to the public by December, after which works would be undertaken on the other side of the road.

He said about 40 per cent the works on that portion have been completed, and gave the assurance that the project was progressing on schedule.

He said the project delayed slightly due the rains because the area is a difficult terrain to work on, but gave the assurance that the challenges were being handled effectively.

On the Nsawam Bypass project, Joe Gidisu, Minister of Roads and
Highways, noted that the Project Affected Persons (PAP), who were delaying the works by not heeding to the relocation timetable because of fear of not being compensated, are going to receive their compensation monies because GHC2.2million has been released for the purpose.