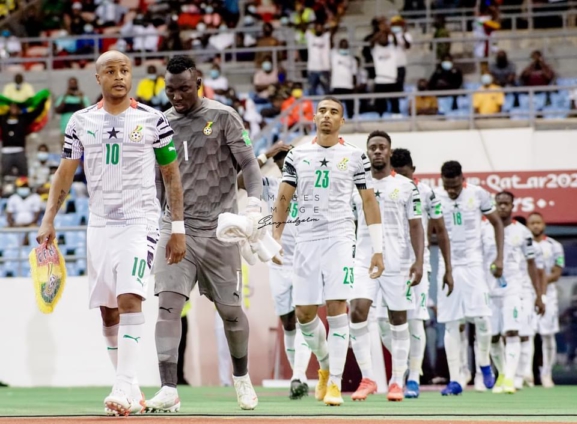 Two African heavyweights rekindle their rivalry at the FNB stadium on Monday as South Africa host Ghana in matchday two of the FIFA World Cup qualifiers.

South Africa come into the game under pressure after dropping two points in a 0-0 draw with Zimbabwe on matchday one of the qualifiers.

Ghana are currently top of Group G after an unconvincing victory against Ethiopia at the Cape Coast stadium on Friday.

The match at the FNB stadium holds huge significance as the top two seeded teams in the group lock horns in their bid to establish supremacy.

South Africa have now kept seven consecutive clean sheets with their most recent coming in a disappointing goalless draw with Zimbabwe on Friday.

The stalemate in Harare was Hugo Broos’ first official game in charge of the Bafana Bafana and he’s re-emphasised that he is trying to build a team and it may take time.

Percy Tau had a chance to snatch a late win for South Africa, though in the end a point apiece was considered a fair outcome.

Broos’ charges are in a situation where they have to pick up a victory against Ghana on Monday to keep their hopes of going to Qatar alive.

Ghana come into the game full of confidence having lost just one their last five games – a streak that included a 1-1 draw with Bafana Bafana six months ago.

The Black Stars narrowly beat Ethiopia in the opener of the World Cup qualifiers thanks to a long-range effort from Mubarak Wakaso.

Despite the win, there have been major concerns about the performance due to the lack of goals.

Charles Akonnor’s men have averaged less than a goal per game, scoring only four goals in the last five games

When it comes to the head-to-head between the two countries, Ghana have lost just once in their previous 10 encounters with South Africa, and haven’t lost a competitive game against Bafana Bafana since February 2000.

Akonnor kept his faith in Wakaso against Ethiopia and was rewarded with the China-based midfielder’s match-winning strike.

Iddrisu Baba was selected alongside Wakaso against Ethiopia in the absence of Thomas Partey and Mohammed Kudus, a combination Ghana are likely to stick with.

Akonnor will be without seven of his players who played a role in the Ethiopia win. Daniel Amartey, Jeffrey Schlupp, Andy Yiadom, Jordan Ayew and Baba Rahman make up the five-man England contingent, who can’t travel to South Africa due to Covid restrictions. The other two are Daniel-Kofi Kyereh and Kamaldeen Sulemana, who have both been recalled by their respective clubs according to the Ghana Football Association.

For South Africa, after opting for a cautious approach against Zimbabwe, Broos may be tempted to vary his side slightly and open up more for the visit of Ghana.

Percy Tau isn’t fully match fit and might once again not last the entirety of the game.

Gift Links was taken off at half time and replaced by Bongokuhle Hlongwane, who joined Evidence Makgopa up top.

Central midfielder Sipho Mbule is another option available if Broos wants to freshen up his side.

Ghana have the upper-hand in Group G and will be more cautious. South Africa on the other hand need the victory and would be more expansive. This could play into Akonnor’s counterattacking setup.