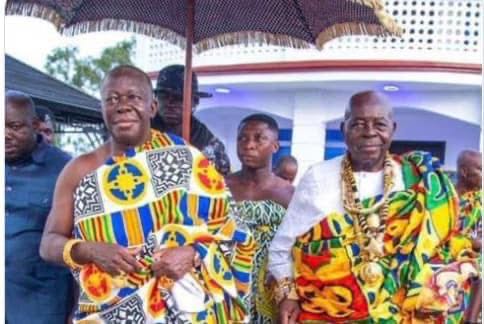 The past weekend had many sides and allowed you to exercise your preference as to whether to laugh or cry. If you wanted to laugh you could tune in to a Kume Preko demonstration, which raised very high hopes for the hungry man, and ended up as a Sere Me Preko.

In the near future, I will do a humble anatomy of demonstrations and undertake a clinical surgery, perhaps with the help of my good friend Professor Cliff Tagoe, who is a clinical anatomist. Thereafter, we shall invite Professor A. B. Akosa, the great pathologist, to undertake an autopsy. Nana Akosa, please stand by for this important national assignment.

There was also a lot to wail about. Our friend A. B. Crentsil, a legendary highlife musician, had passed on to eternity, and it was time to take him home. The tearful scenes witnessed on TV were humbling. May A. B. Rest in Peace.

But there was something to cheer about within the context of national gloom, stress, strikes, and even anger in places: a festive occasion, that brought hope, hummed peace and sang a chorus of unity, harmony and national cohesion. The architects of the festival were Awomefia Togbui Sri III, Paramount Chief of the traditional Anlo State, partnered by several great chiefs and kings from around the country. In attendance was the Vice President, Dr Mahmoud Bawumia, standing in for the President. It was the 60th Hogbetsotso festival of the Anlo people.

But I single out for mention the historic participation of Otumfuor Osei Tutu II, King of the traditional Asante state, who made history as the first Asantehene in more than a century, to set foot on the sandy landscape of Anloga, and break bread with the Anlo people. It was simply historic.

For those unsure of the importance of Otumfuor’s attendance, let me offer a few reminders for the record. Otumfuo Osei Tutu II in September this year turned a blind eye to the funeral of Queen Elizabeth II, in which several global dignitaries stampeded to participate, and others considered as lifetime camera opportunities. Recall the meandering queue of several kilometres of mourners, slowly moving day and night to file past the royal remains at Westminster Hall, London.

But also remember the humbling of some dignitaries who lost their ceremonial sovereignty, and were treated to bus rides, while their subjects giggled back home calling it a humiliation. For chiefs and kings that attended the event in London, some may have quietly broken local taboos and for the first time, set eyes on mortal remains while occupying royal positions.

Not Otumfuor Osei Tutu II. He decided to opt-out of the madding crowd, diplomatically declining an invitation to attend. Let the dead bury their dead, he said under his breath. His forefather, Osei Tutu I had paved the way, founding the Asante empire in the 18th century. Not until 1900, the Asante resisted joining the Queen’s Gold Coast Colony, and it took the exiling of a ‘stubborn’ King Prempeh I by the British, to pave the way for colonization.

In 1902 after exiling King Prempeh, the British routed the Asante and looted their treasury. These are sour historical points to note and pass on, and not suppress in the name of contemporary diplomacy. Above all, Asante custom itself forbids Otumfuor from setting eyes on mortal remains.

Simply, Asantehene does not join crowds; he throbs with a sense of history and custom and steps forward only with the discretion of hindsight.

There is homework to do in our own homeland, he said to himself.

Otumfuor leads a traditional state that is very hospitable to other cultures; it adopts and adapts fragments of other lifestyles, and so does it leave residues of its own in areas of mutual interaction. To this end, there is an entire township of Ewes in Kumasi, Anloga, which is well recognized and integrated; and there has been a sprawling ‘Pekyi’ settlement, for immigrants from Peki, from time immemorial.

Diversity does not impoverish Asante culture, it enriches Asante. On ascending the throne in 1999, Otumfuor Osei Tutu II established an Education Fund and extended this to all needy and brilliant students regardless of ethnicity. But one thing must have hurt Otumfuor’s pride: the deep-rooted mistrust between the Asante and Ewe, that still permeates all sectors of life.

If there were any historical alliances between the two, these may have been erased by a single incident triggered by the politics of 20th century Ghana. And what was this?

In 1969 one Asante politician, venerable lawyer Victor Owusu, during his campaign for the general elections made a derogatory reference to Ewes at Ho. He belonged to an antecedent of the NPP called PP, the Progress Party, led by Dr K A Busia, who was battling the National Alliance of Liberals led by K. A. Gbedemah. The ethnic slur was clearly in bad taste, and for this copious apologies were rendered and rituals of atonement performed.

The stigma however stayed throughout Victor Owusu’s life and strained the relationship between the Ewe and Asante. Some 50 years thereafter the ripples linger and still drive political affiliation and tribalism across the board, the Asante is perceived as holding Ewes in contempt and vice versa; except that Ghana has been spared its further decline into civil strife.

In the light of an ominous cloud of mistrust between the Ewe and Asante, lingering for 50 years and more, would Otumfuor accept an invitation to join Awomefia Sri at Anloga? On the other hand, would an incendiary outcome be easy to control?

Last Saturday, I was teary-eyed, seeing on video a long convoy of 72-seater VIP busses serially arriving at Anloga amidst cheers by Anlo onlookers. The eventual arrival of Otumfuor’s sleek limo drove the crowd into a frenzy and foreshadowed a historic climax.

This was far from an empty display of flamboyance often associated with political convoys. Militant Asante appeared to be on a war path with a virtual invasion that could have seen the wielding and cocking of guns. Instead, the ‘invading’ army arrived from Kumasi holding a bouquet of flowers. Their General was Otumfuor Osei Tutu II, and his message was simple. We are here not to fight. The Asante wars of territorial expansion are over. 21st century Asante wars rather seek to conquer ignorance, poverty, and tribalism. It was indeed an occupation force hoisting the banner of peace and harmony with the Ewe and the rest of Ghana.

The diversity of cultural performances, parade of chiefs, bodily adornment and sheer pageantry portrayed a rare spectacle with a huge potential for export. We should pray that the symbolism of ethnic harmony portrayed by the two great Kings, drills down and impacts all aspects of life.

But the passion for ethnic diversity displayed by Otumfuor had a mirror in his counterpart, which was unknown to many. Awomefia Togbui Sri III is not new to the game of inter-ethnic harmony, and has been a great ally of diversity in his private life.

This great King gave me the shock of my life in June 2019.

I was minister of state at the Ministry of Education, and got invited to Anloga to represent the Vice President Dr Mahmoud Bawumia, as guest speaker at the Speech Day of Anlo Senior High School. Unknown to many I had a hidden agenda beyond the official mission. I decided to pay a courtesy call on Awomefia the paramount chief and introduce myself ahead of the event. I was with my special assistant, Abeeku Ansah.

The idea was to surprise Togbui with the news that I was married to a Tamakloe, one of his ‘grandchildren.’ Surprisingly my Anlo links were no news to Togbui. Awomefia knew my senior brother Kojo Yankah very well, and had been told about my Anlo romance with the Tamakloe family of Huti. Togbui Sri was excited, but that was no news to him. The news, he said, was rather that he Togbui Sri himself had been married to a woman from my hometown Agona Nsaba/Duakwa for over 30 years. It started long ago when he was a policeman known as Mr Patrick Kobla Atiasa. Patrick, the policeman was posted to Agona Nyakrom several years ago, and found a jewel in the Agona vicinity. Between Patrick and his wife from Duakwa, they had three big girls who lived with him as he spoke.

This simply meant that even as Patrick was a policeman, the gentleman was entitled to patrol duties, during which he occasionally switched his eyes to roaming!

I listened in utter disbelief as Awomefia narrated the story of his romance with my own Agona sister. Togbui immediately called two of the big girls, who appeared and confessed they knew me from Duakwa. This triggered a virtual celebration at Togbui’s residence in Anloga 2019. We quickly posed for pictures. Unfortunately, I had not brought along their own sister of the Tamakloe family. I was later to also meet Mr Albert Francis Nyonyo, member of the Council of State and currently President of the best alumni association in the Universe, Mensah Sarbah Hall. Nyonyo was the regent of the Anlo state before Awomefia’s installation, and he has since been a great friend.

Congratulations, to the two wise kings.

To the young ones let me say, there is no love lost; Anlos, Ewes and Asantes, Akans; we are all one people. Go for it.

Ewe girls are good ooooo! So are Akan girls.

DISCLAIMER: The Views, Comments, Opinions, Contributions and Statements made by Readers and Contributors on this platform do not necessarily represent the views or policy of Multimedia Group Limited.
Tags:
Ewe-Asante romance
Prof Kwesi Yankah