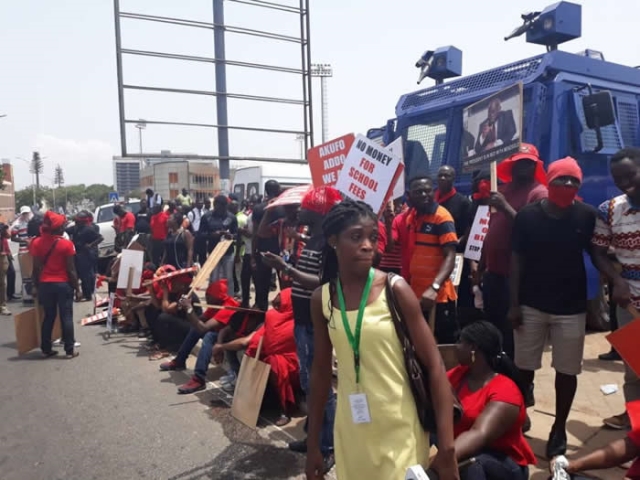 Ghana has in recent times seen an upsurge of public protests by customers of various financial institutions.

Those engaged in these demonstrations, aka “demos” have identified themselves as investors who have funds locked up in a number of struggling financial institutions. Their simple request is to have their funds returned. But is everything so simple? How effective are these demos and how does hitting the streets bring back their monies?

A trip down memory lane will help us understand how and why demos became a trend. This is not to patronise but to empathise, considering the multitude of customers whose lives have been negatively affected.

The Commission said it had found, following investigations into Menzgold activities, that the firm did not have the license to publicly trade in gold collectibles. This moment was likely in parallel to when panic withdrawals hit the investment industry as well.

Following this directive, some customers of Menzgold hit the streets in what was likely the first industry related demo.

The Menzgold customers at the time used the demo to express their displeasure with the SEC directive, saying Menzgold was giving them financial freedom. That the company was employing thousands with its trade in gold collectibles.

A month later, Menzgold customers switched tune and went on a series of demos, “shiing jama” and holding up traffic in major cities saying the company (Menzgold) was failing to pay them the agreed 15 per cent of their principal after several promises made after the SEC directive.

Many regional, large and small customer demos later, things in the industry remain stalled. The jury is still out on Menzgold. Was it a pyramid scheme? If so, how did they operate so long? Whatever it is, the company is yet to pay its customers.

But the discussion here is not Menzgold. It is about “demos”.

Undeniably, almost every customer demo has had some level of impact. Yes, demonstrations are vital expressions of strongly held public opinions and an opportunity for the aggrieved group to vent their frustrations to whomever it may concern; in this case, struggling fund managers and the regulator, SEC.

A host of fund managers are listed on the SEC website as having complaints lodged against them. Some fund managers have purportedly returned their license to SEC while others like industry leader, Gold Coast Fund Managers, battle their liquidity crisis by paying customers via a schedule while reassuring that the actual business remains viable.

The SEC, in the meantime, has directed all fund managers to stop offering guaranteed returns on investment.

With so much going on, fund managers' customers are rightly confused, frustrated and in genuine need of their returns. Can you blame them for doing what they think is their only avenue for redress?

But the question remains. Have the demos actually solved anything? In fact, arguably, the demos may be making things more complicated. Are we not fighting fire with fire?

Several months down the line, demos are not working so customers must change their tactics to get their monies.

There are rumours that some of the customer groups organising the demos are structured like vigilante groups. They even pay dues and all and in some cases, their leaders are using the groups for their own politico-social gain.

These demos do not give room for proper dialogue in solving problems. They have in most situations posed a serious security threat to workers of these investment houses where some even fear for their lives.

A man owed by Gold Coast Fund Management in a recent protest allegedly switched off the power supply to the Adum office of the company in Kumasi, forcing management to shut down the office temporally. There have been other instances where customers have destroyed the company’s equipment and vandalised property. How does that bring back their money?

If not “demo” then what?

The protests are not changing the situation. There is an industry-wide liquidity crisis brought on by whatever causes. At this point, the demos only serve to cause fear and panic and fuel more demos which ultimately slows down the process to pay them back.

It doesn’t make sense that the investment houses currently facing challenges will want to jeopardize their hard earned reputation.

A number of them, Ghanaian businesses like Gold Coast, have been in existence for over twenty years. They have too much to lose if they don’t continue paying their customers or resolve their liquidity challenges. In Gold Coast’s case, the SEC confirmed they are in talks with the company for a replacement restructured finance product to help alleviate things.

The company announced earlier this year it has so far paid GHS60 million to customers and is continuing. They further said they are prioritising customers with emergency needs such as medical bills. The demos, unfortunately, can’t make this process go faster.

SEC says they are in serious talks with the Bank of Ghana (BOG) and the Ministry of Finance to address the situation of Fund Managers. It’s about time. Customers need their monies and we can’t let Ghanaian companies falter.

If not demo, then what? Customers should hold their regulators to task; send their complaints to the SEC; meet with their fund managers; demand transparency and constant updates on payment plans. These measures may appear slow but they definitely have more impact than breaking company windows and shouting in the hot sun. After so many demos, the media reporting doesn’t change and customers start to sound like broken records.

In no way is this downplaying customers’ genuine need for their monies but another question pops up. Do all the customers asking for their monies actually need their monies now? Maybe we are causing our own problems by asking to withdraw all our monies in panic. After all, fund managers all over the world invest our monies when we invest so it is impossible to expect them to give us all back our monies at the same time.