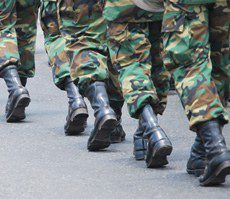 The Ghana Armed Forces (GAF) has confirmed negative, the status of two soldiers quarantined at the 37th Military Hospital in Accra suspected to have contracted the deadly Ebola virus from a peacekeeping mission in Mali.

“I have just spoken to the Hospital authorities this morning and they have confirmed that tests carried out on both soldiers returned negative for the Ebola virus”, Lieutenant Colonel Eric Aggrey-Quashie, Director of the Public Relations Directorate of the GAF told the Ghana News Agency, Friday in Accra.

The two unnamed soldiers, quarantined since Tuesday as a result of an unknown ailment, after returning from a United Nations peacekeeping mission in Mali, caused a scare at the Hospital, with patients and medical staff expressing unease on the status of the two, who are reported to have been admitted at a hospital in Mali that catered to Ebola victims.

Hospital authorities were tightlipped yesterday, preferring to observe established protocols for divulging information on such issues.

The blood samples of the two soldiers who were put in isolation at the Bandoh Ward A had their blood samples tested at the Noguchi Memorial Institute for Medical Research (NMIMR) yesterday.

“There is no cause for alarm…the soldiers are not Ebola positive”, said Lt. Col. Aggrey Quashie.

“The hospital was following strictly the Military High Command’s position of ensuring that soldiers returning from duties outside the country are disease-free."