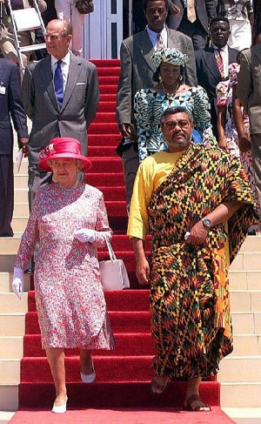 The Royal Family of Buckingham Palace in the United Kingdom, Her Royal Highness, Queen Elizabeth II and her son, the Prince of Wales, His Highness Prince Charles have shared a touching tribute in honour of the late former president Rawlings.

Queen Elizabeth II in her tribute said she was saddened when she heard of the death of the late statesman, a man she described as being relevant in “laying the foundations of Ghana’s now proud democratic traditions”.

“I was saddened to hear about the death of H.E Jerry John Rawlings, the former President of Ghana in 1999, and our many discussions at Commonwealth Heads of Government meetings.

“He made an invaluable contribution to the creation of the current constitution and returning Ghana to democracy in 1992. I wish to convey, my condolences to his family and to the people of Ghana,” Queen Elizabeth said in her tribute.

Her son, Prince Charles recounted how a young Flight Lieutenant Rawlings of the Ghana Air Force escorted his aeroplane as it landed in 1977, during his first visit to Ghana.

His letter, dated November 16, 2020, was sent, four days after the passing of the former president of Ghana.

Letter of His Royal Highness Prince Charles on the demise of Flt Lt Jerry John Rawlings below:

“My wife and I were so very sad to learn of the death of His Excellency former President Jerry John Rawlings.

Knowing what a towering figure former President Rawlings was in Ghanaian public life, and how greatly he was respected for laying the foundations of Ghana’s now proud democratic traditions.

I can well imagine how keenly his loss will be felt by so many people. For my part, I have such special memories of having met former President Rawlings on my visits to Ghana, most recently in 2018, when we had the opportunity to recall fondly how, in 1977, it was a young Flight Lieutenant Rawlings of the Ghana Air Force who escorted my aeroplane as I landed in Ghana for the first time.

As Ghana mourns the passing of former President Rawlings, my wife joins me in sending our heartfelt condolences to his family, to yourself and to all the people of Ghana.”

The former President passed away on November 12, 2020 at the age of 73 and buried on Wednesday, January 27, 2021 at the Military Cemetery in Accra after a four-day funeral rite ceremony held in his honour.

DISCLAIMER: The Views, Comments, Opinions, Contributions and Statements made by Readers and Contributors on this platform do not necessarily represent the views or policy of Multimedia Group Limited.
Tags:
Covid-19
Jerry John Rawlings
JoyNews